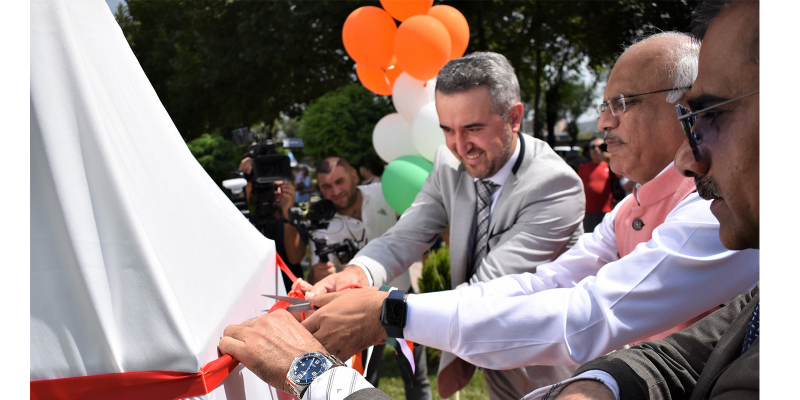 The unveiling ceremony of the statue of the political and spiritual leader of India, a pioneer of peace, Mahatma Gandhi was held today in Buenos Aires Park of Yerevan (section of Halabyan-Margaryan streets).

The event was attended by RA ESCS Deputy Minister Ara Khzmalyan, Chairman of the Council for Cultural Cooperation of India, Member of the Upper House of the Parliament of India Vihai Sahasrabuddhe, who is on an official visit to Armenia, and Ambassador Extraordinary and Plenipotentiary of India to Armenia Kishan Dan Deval.

“The Armenian-Indian ties have deep historical roots. Since ancient times Armenians have developed activities in India in the fields of publishing, economy and trade. And this event is a testament to the stability and advancement of those relations. Accept the establishment of Mahatma Gandhi statue in Yerevan as a tribute of the Armenian people to the history of the Indian people,” stated ESCS Deputy Minister Ara Khzmalyan in his congratulatory speech on the opening of the statue to the great figure.

Chairman of the Council for Cultural Cooperation of India, Member of the Upper House of the Parliament of India Vihai Sahasrabuddhe was thankful for the decision of erecting the statue of the Indian leader in Yerevan. “By opening this statue, Armenians and the Indians who came to Armenia from India will always remember the principles and ideology of Mahatma Gandhi. “This is going to be a driving force for us to create a better world,” said Vihai Sahasrabuddhe. Referring to Gandhi's activities, he noted that Mahatma Gandhi was one of the leaders and ideologists of the Indian movement for independence from Great Britain. Gandhi employed nonviolent resistance, struggle without evil, shootings, where the only weapon of people was their lives. When, thanks to his persistent efforts, India was peacefully granted independence from Great Britain in 1947, the world was convinced of the effectiveness of Gandhi's ideology. Gandhi’s birthday, 2 October, is commemorated as a national holiday in India and worldwide as the “International Day of Nonviolence”.

Ambassador Kishan Dan Deval was also grateful for the opening of the statue of Gandhi in Yerevan, considering it a base for strengthening and continuation of the Armenian-Indian long-standing relations.