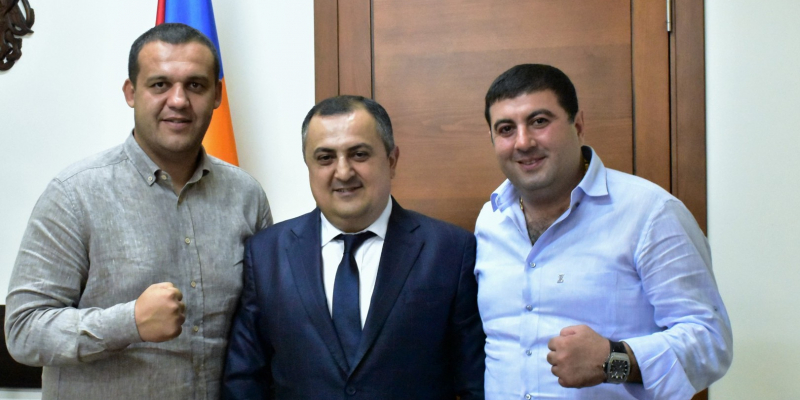 Welcoming the visit of Umar Kremlev to Armenia, Karen Giloyan highlighted the importance of close collaboration with the International Boxing Association and expressed willingness to take the necessary steps in this regard.

“Armenian boxing takes a new path of development. We need to have a full-fledged dialogue with the International Sports Association around the development prospects and hold international tournaments in our country. I guarantee the state support in this regard. We want to foster the partnership and make them more productive,” stated the ESCS Deputy Minister and confirmed his willingness of promoting the initiatives of the International Association aimed at the advancement of boxing.

Thankful for the warm reception. Umar Kremlyov stated that the international structure also wants to give a new quality level to the existing cooperation. The President of the International Boxing Association responded positively to the proposal of organizing a major tournament in Armenia, not even excluding the possibility of holding the European Championship among adults in our country.

“First, I want to express gratitude to the Boxing Federation of Armenia for organizing high-level elections. The Boxing Federation of Armenia has a very active and progressive leader in the name of Hovhannes Hovsepyan. AIBA is taking active steps to strengthen the position of boxing in world sports, restore the best traditions of sports, and is open to cooperation. I have great respect for your historical country and the people, who have a particularly warm attitude towards sports,” said Umar Kremlin.

Other issues of mutual interest were also discussed at the meeting. The President of the International Boxing Association invited Karen Giloyan to attend the World Boxing Championship, which will be held in October in Serbia. The Deputy Minister responded positively to the invitation.