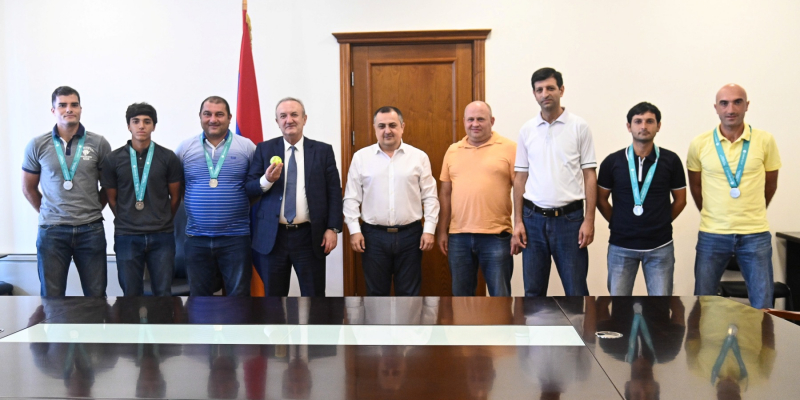 The victories of the Armenian athletes are an indicator of belief in their own strength not only for athletes but also for our nation.

“Such successes are the basis for greater victories. Many people аrе inspired by your competitions, which serve as an example for them. Victories in sports are an indicator of belief for athletes and people, in their own strength, so you have a very important impact on inspiring the Armenian society. Keep sharing with us the sense of pride, and the Ministry will do everything possible to support and encourage you," noted the ESCS Acting Minister and stressed that he is always ready to listen to suggestions and considerations from the sports world representatives.

The head coach of the Armenian national tennis team Vahe Avetisyan spoke about the team's performances at the Davis Cup, noting that they were initially determined to win: “We realize how important the victories are for our nation after last year's difficulties, and we spared no effort to win. Our target was to move to the next level, which we managed to achieve. Decisive were the victories over Albania and Azerbaijan for moving to a higher level, after which the round with Montenegro was no longer of significant importance. This victory belongs to all of us – the State, the Ministry, the Federation and the athletes. We are filled with positive emotions and are ready for greater victories.”

Vahram Dumanyan inquired from the Tennis Federation of Armenia representatives about the upcoming programs of the team and discussed the prospects of dissemination and advancements of tennis in our country. The ESCS Acting Minister assured that the Ministry is ready to make every effort to jointly solve the current issues.

Thankful for the reception the participants gave the ESCS Acting Minister a ball with the signatures of the Davis Cup as a winning souvenir.