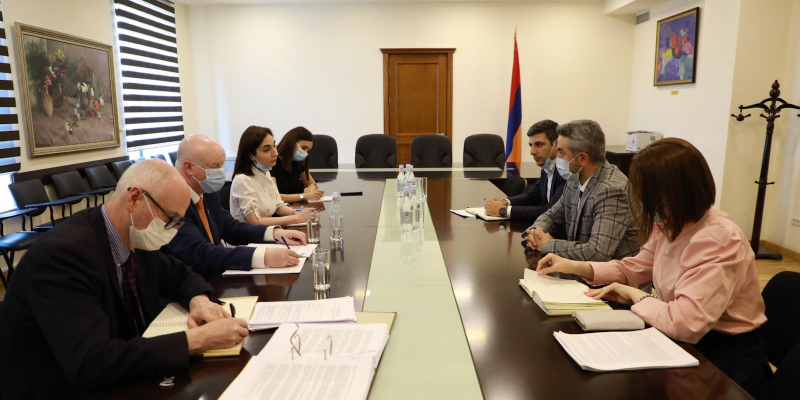 Emphasizing that the Armenian people are going through one of the most difficult stages of their history, Ara Khzmalyan expressed gratitude for the assistance of PACE in the post-war period. The Deputy Minister, in particular, underlined the importance of the latest PACE resolution on Armenia and Artsakh, which, besides the problems of human rights violations, separately raised the issue of preserving Armenian historical and cultural monuments under the control of Azerbaijan.

Ara Khzmalyan informed the PACE delegates that as a result of the war unleashed on September 27, 2020 against Artsakh, more than 2000 Armenian historical and cultural monuments, as well as 10 museums (8 public, 2 private) with about 20 thousand exhibits remained under the control of Azerbaijan. Moreover, the cultural monuments were targeted and shelled throughout the course of the military operations.

Ara Khzmalyan expressed concern about the threat to the Armenian historical and cultural heritage in the territories under the control of Azerbaijan, given the decades-long anti-Armenian policy and the deliberate destruction of the Armenian heritage.

The Deputy Minister stated that Azerbaijan creates artificial obstacles for monitoring visits to assess the state of the Armenian historical and cultural heritage in the occupied territories, including recommendations of authoritative international organizations.

Ara Khzmalyan especially emphasized that the Armenian side expects the active support of the European partners in the preservation of historical and cultural heritage. The ESCS Deputy Minister pointed out that the videos and photos released on the Internet prove that the state policy of destroying the Armenian identity continues in Azerbaijan, one of the manifestations of which is the transformation of the dome of the Saint Ghazanchetsots Church in Shushi, and the attempts of presenting Dadivank Monastery as of non-Armenian origin.

The European delegates noted that a report on the consequences of the war is being prepared which will be presented to the MPs of all 47 PACE member states at the session starting in September. In the frame of preparing the report, the PACE rapporteur on Migration, Refugees and Displaced Persons Paul Gavan is also going to visit Azerbaijan. He expressed his concerns of not having the opportunity to visit Artsakh.

Ara Khzmalyan, in his turn, noted that in connection with the upcoming visit of the PACE delegation to Artsakh, as well as other international delegations, the Armenian side has always shown a constructive position.

The partied exchanged views at the end of the meeting.