New prospects for the development of Armenian-Kazakh cooperation are discussed 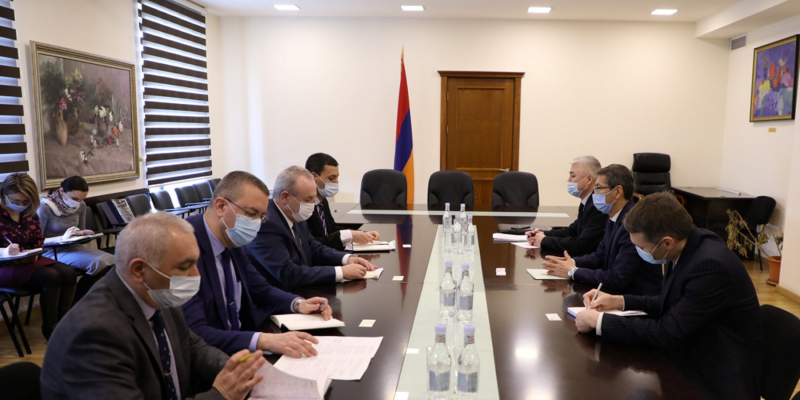 Vahram Dumanyan congratulated Bolat Imanbayev upon the assumption of the responsible position expressing confidence that he will contribute to the further strengthening and deepening of the relations between Armenia and Kazakhstan.

The Minister highlighted the possibility of sustainable development of the Armenian-Kazakh inter-university cooperation through the implementation of joint educational and research, as well as exchange programs of students and lecturers. He underlined that 10 leading universities of Armenia are already collaborating with partner organizations of Kazakhstan, which contributes to the internationalization and increase of attractiveness of the universities of the two countries. ESCS Minister noted that about 40 citizens of Kazakhstan study in the universities of Armenia, expecting that their number will increase.

Vahram Dumanyan expressed his willingness to develop cooperation in the field of science. According to him, such cooperation is promising in terms of implementing new scientific programs and initiatives. The Minister emphasized the importance of the International Zhautykov Olympiad annually held in Kazakhstan in mathematics, physics and computer science.

During the meeting the ESCS Minister drew the Ambassador's attention to the issue of preserving the Armenian cultural heritage in the territories that came under the control of Azerbaijan, and noted that the Armenian side expects the assistance of the progressive humanity. Vahram Dumanyan noted that the Armenian side has reliable information that about 4,000 Armenian monasteries and cultural monuments are currently under real threat of destruction. ESCS Minister expressed hope that the Government of Kazakhstan will keep this issue in the scope of attention.

Vahram Dumanyan also noted the importance of strengthening cooperation between the two countries in the field of culture, as well as the need of holding joint sports camps and events in the field of sports.

In his turn, Ambassador Extraordinary and Plenipotentiary of the Republic of Kazakhstan Bolat Imanbayev noted that it is a great honor to be an ambassador to such an ancient country as Armenia, and expressed willingness to further strengthen the Armenian-Kazakh relations. According to him, at present there is an effective cooperation between the governments of the two countries both in the bilateral and within the framework of the Eurasian Economic Union.

The Ambassador also touched upon the effective activities of the Armenian Diaspora in Kazakhstan, noting that it is truly a "living bridge" between the two countries. Bolat Imanbayev said that in 2019, the Embassy of Kazakhstan in Armenia organized a scientific conference dedicated to the current stage of studying Ghpchagh manuscripts in Armenian letters and literary readings dedicated to the classic of Kazakh literature Abay Kunanbayev.

A number of other issues related to education, science, culture and sports were discussed during the meeting.