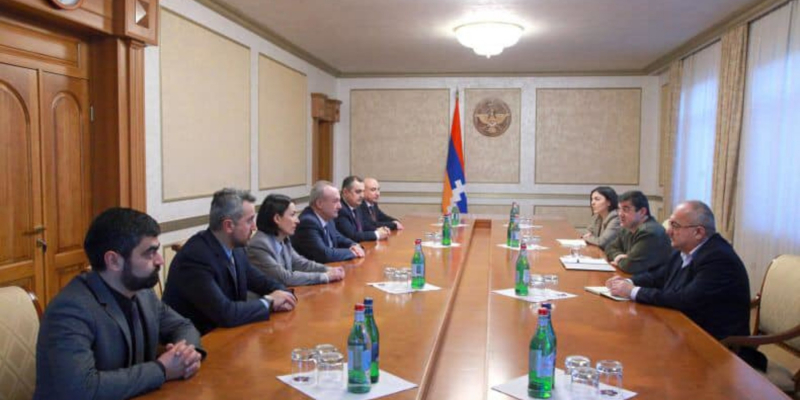 On February 22, President of the Republic of Artsakh Arayik Harutyunyan received the delegation headed by the RA ESCS Minister Vahram Dumanyan, who is in Stepanakert on a working visit.

The President of the Republic of Artsakh noted the importance of cooperation between the partner structures of Artsakh and Armenia, underlining that it is necessary to continue making new efforts to advance the quality level for general and higher education systems of Artsakh.

Noting that almost all the senior officials of the Ministry have arrived in Artsakh, RA ESCS Minister Vahram Dumanyan stated that the discussion of a wide range of topical issues are on the agenda during the visit.

The RA MESCS delegation also had a meeting with the Minister of Education and Science of the Republic of Artsakh Lusine Gharakhanyan and the principals of Artsakh secondary schools. Minister L. Gharakhanyan presented the upcoming programs in the field of education, calling on teachers to look to the future with faith and confidence and spare no effort to overcome the post-war crisis.

Highlighting the role of education, RA ESCS Minister Dumanyan noted during the meeting that the cornerstone of the security of Armenia and Artsakh is to ensure high level performance in the fields of education, science, culture and sports.

Within the framework of the visit, meetings were also held with the representatives of culture and sports sector.