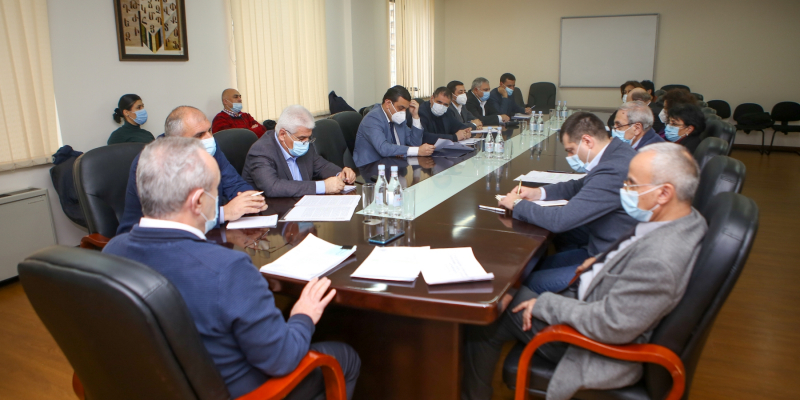 Today, the Minister of Education, Science, Culture and Sports Vahram Dumanyan received members of the RA Council of Rectors. The meeting was initiated by the Council of Rectors to discuss a number of provisions of the draft amendments to the RA Law on “Higher Education and Science” and related laws approved by the RA Government the day before.

Welcoming the members of the Council, Minister Dumanyan noted that if there are certain concerns in the academic community regarding the draft law on “Higher Education and Science", the Ministry is willing to listen to all the observations: “In this process, I am one of you; I am interested in having as perfect a complete law as possible։ this law was not written in a week. It has been constantly changed, revised and has had a long journey.”

Members of the Council, thanked the Minister for quick response to their initiative and presented, in their opinion, some controversial points of the draft. Thus, it was mentioned that the transitional provisions of the draft law set a term of termination of the licenses of the universities, that is, the licenses issued to the university are valid until November 30, 2021 inclusive. According to board members, it is unclear on what basis the licenses will be terminated. The next problematic issue raised by the board members was the point in the transitional provisions that governing councils are formed within a year after the law enters into force. According to the draft, the existing councils continue to exercise their authority until the formation of new governing boards, as well as the head of the authorized body of the sector is appointed as a rector and director for a term not exceeding five years. According to the members of the Board of Rectors, in this case a number of points defined by law do not apply to the appointed rector, namely the procedure of election, minimum qualification criteria, the lack of a mechanism for the board to express no-confidence in the rector. The members of the Council also found the mandatory program accreditation of higher education institutions set out in the draft law, disturbing, noting that it will become a big financial burden for higher education institutions. According to the board members, higher education institutions must also pass institutional accreditation, and the above-mentioned processes will also face the issue of human resources.

The members of the council also raised the issues of rotation principle, full and partial load of students, awarding and recognition of academic degrees, issuing certificates, excluding discrimination between public and private universities, rating of universities, forming the composition of councils, etc.

“The State is the founder of state universities, and excluding possible manifestations of collective irresponsibility, the State should bear full responsibility for the effective operation of each state university․ I consider my main mission as the ESCS Minister to overthrow the atmosphere of distrust and the establish peace. We are all one unity, each of us must do our best to eliminate the unhealthy atmosphere in the universities, to achieve solidarity," emphasized Minister V. Dumanyan.

The Ministry officials present at the meeting referred in detail to all the concerns and observations of the members of the board of rectors, offering to submit them to the authorized body on December 7 in written form.