Montserrat Caballe - in Shush: Exclusive footage from the visit in 2014
Culture 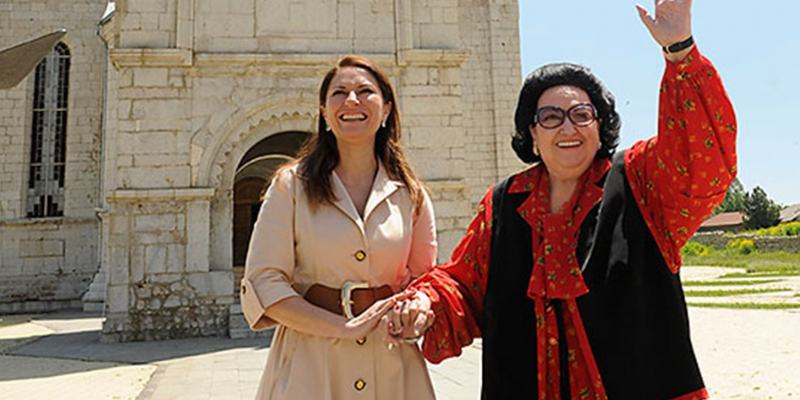 With the exclusive right of demonstration, the RA ESCS Ministry presents for the first time the video entitled "Armenia-Artsakh: Christian Island" in which the world-renowned Spanish opera singer Montserrat Caballe performs "Krunk" by Komitas by the accompaniment of the National Philharmonic Orchestra of Armenia. In the footage that was never screened, the world-famous singer admires the Church of the Holy Savior Ghazanchetsots in Shushi, which was barbarically shelled by the enemy on October 8.

“Armenia has always been the cradle of Christianity. The power of Gandzasar is in its faith: I am here because of this profound faith. I can say everywhere that I have been to Gandzasar, it is very important for me. This is not an ordinary pilgrimage, and Gandzasar is not an ordinary place either: Gandzasar is the Promised Land on the Armenia-Artsakh Christianity Island. I am happy to be able to convey to the world the news of this Christian island, which is so far away in space and so close to our hearts. Christian Artsakh unites us with its faith, guiding us to the future. This country is not only an island of Christianity, but also the root of the history of Christianity," the singer said during her visit to Artsakh.

Witnesses state that in Gandzasar the singer admired the beauty of the church, touched the walls, studied the inscriptions for a long time. She did not hide her admiration towards the Armenian medieval church architectural art, explaining the interest in the abundance of Armenian Christian monuments.

The video footage is from the Artsakh visit of Montserrat Caballe in 2014. The famous “Starmus Universe” organization gave the exclusive right to show the video to the RA Ministry of Education, Science, Culture and Sports. The video once again reminds the civilized world and urges that the Azerbaijani aggression against Armenia and Artsakh, in the island of Christianity in the South Caucasus, must be condemned.