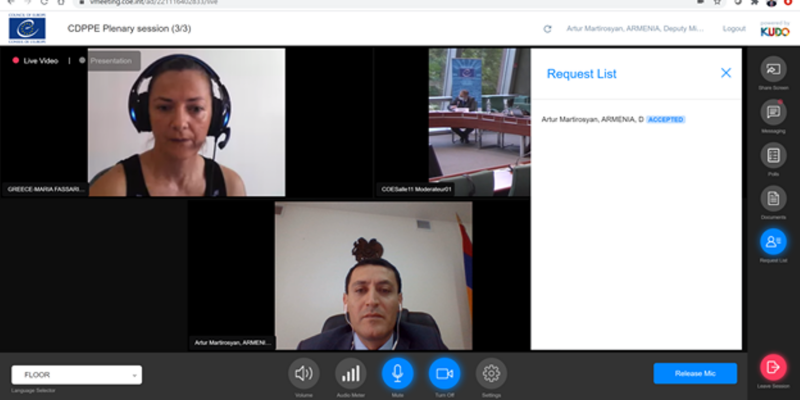 Mr. Martirosyan noted that Azerbaijan is the only country in the world to launch a large-scale act of belligerence in the face of a global pandemic, ignoring UN Secretary General Antonio Guterres’s call, made on March 23-rd, urging all warring parties across the world to lay down their weapons, in support of the bigger battle against COVID-19: the common enemy which has been threatening all of humankind. Stressing the fact that it is within CDPPE’s tasks to foster a safe learning environment for all children, Mr. Martirosyan called on international partners to strongly condemn the war unleashed by Azerbaijan, whose armed forces have targeted civilian infrastructures, including educational institutions, not only in the Republic of Artsakh, but in the Republic of Armenia, as well.

The 14-th plenary meeting of the CDPPE was held from 30 September to 2 October 2020 in an online format. In attendance were representatives of around 50 countries, comprised of high-ranking officials in the field of education, as well as experts from European and other international organizations specialized in education-related issues. The committee discussed the political declaration, “The education response to the COVID-19 crisis,” which is expected to be adopted at CDPPE final plenary meeting at the end of October, with participation from the Ministers of the CoE member states. The declaration covers four main areas: strengthening democracy through education; innovating the ways in which we learn and teach; assessing and recognizing qualifications; and ensuring the right to education for the most vulnerable students.

Participants also discussed the following topics: the implementation of the CoE’s Reference Framework of Competencies for Democractic Culture (RFCDC); the approaches taken by participating member states in the field of inclusive education; the Observatory on history teaching in Europe, digital citizenship education, the organization of education provision for refugees, migrants, and other vulnerable groups.