A memorandum of understanding between the RA Ministry of Education, Science, Culture and Sports and the “ITER VITIS” Federation
Culture 17 August 2020 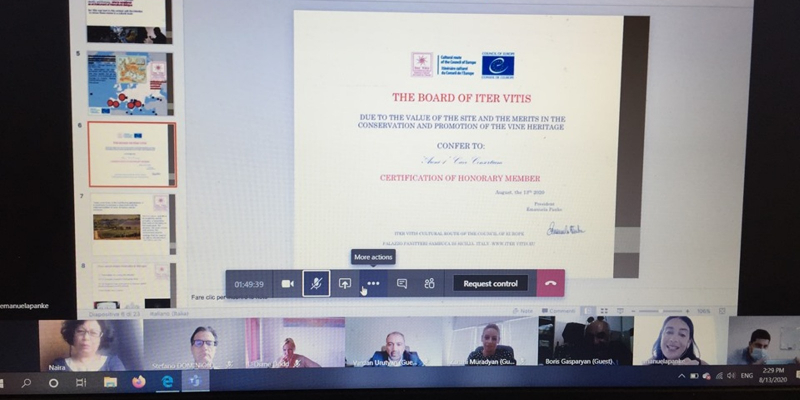 A memorandum of understanding was signed between the MoESCS and the “ITER VITIS” Federation within the framework of an online meeting. The parties expressed their willingness to enhance cooperation within the framework of the program “Cultural Routes” of the Council of Europe to implement targeted and effective projects in the future. The document was signed by the RA Deputy Minister of Education, Science, Culture, and Sports Narine Khachaturyan. One of the main outcomes of the online meeting is the awarding of the Certificate of Honorary Member of “ITER VITIS” Federation to the “Areni-1 Cave” Consortium. During the meeting, the activities of the Federation and the "Cultural Routes" program were introduced; a reference was made to the activities of the university network of the program, as well as wine as a tangible and intangible universal value, winemaking, education, professional training, archeology, and many other issues were discussed. Significant work has been carried out over the past few months to further strengthen and enhance activities in the “Cultural Routes” program, as well as to collaborate and join a number of other cultural routes. In particular, the guide to the Council of Europe's "Cultural Routes" program has been translated into Armenian and will be published on the program's website in the near future.

It should be noted that the Republic of Armenia has been a full member of the "Cultural Routes" program of the Council of Europe’s Enlarged Partial Agreement since 2015. "Cultural Routes" program of the Council of Europe was established in 1987 to promote cultural cooperation and tourism development in the context of European heritage. 38 cultural routes have been created within the frame of the project that promote real, sustainable, participatory development across the European continent and beyond in the spirit of European identity, cultural diversity, respect and dialogue. The Cultural Routes put into practice the fundamental principles of the Council of Europe: human rights, cultural democracy, cultural diversity and identity, dialogue, mutual exchange and enrichment across boundaries and centuries. Out of the 38 cultural routes, Armenia is a member of the “ITER VITIS” cultural route. The “ITER VITIS” cultural route was established in 2009. Like the “ITER VITIS” cultural route, all 37 other cultural routes provide a unique opportunity to join, collaborate with professional associations throughout Europe, participate in various professional discussions and conferences.