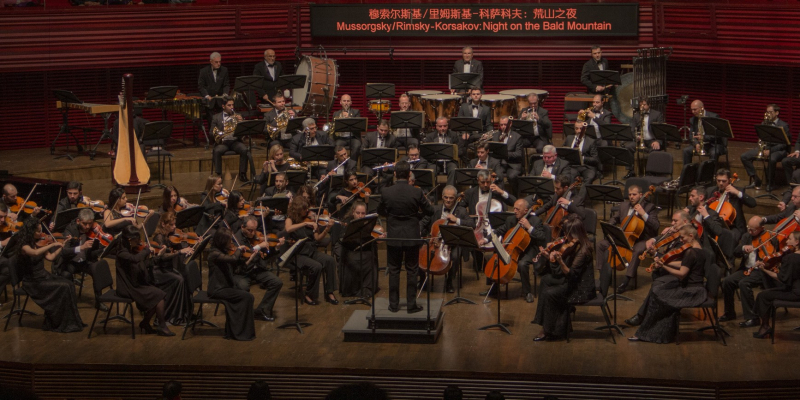 With the support of the RA MoESCS, the Armenian National Philharmonic Orchestra toured China from December 25 to January 10, 2020.

“During these fifteen days of the tours you have made a great contribution to the development of Armenian-Chinese cultural relations”. This is how the Ambassador Extraordinary and Plenipotentiary of the Republic of Armenia to China Sergey Manasaryan greeted the Armenian National Philharmonic Orchestra (hereinafter: ANPO) at the reception organized by the Embassy on the last day of the tour.

The ANPO celebrated the New Year 2020 in China which is one of the most important centers for classical art performance. The Armenian National Philharmonic Orchestra is the largest Armenian delegation ever to visit China. Under the direction of the artistic director and principal conductor Eduard Topchyan, the ANPO performed ten concerts in nine major Chinese cities. Eduard Topchyan states: “The tours were a great step forward in presenting the orchestra in the huge Chinese culture with such an extended concert program. We mainly performed symphonic works, which was a great responsibility for the orchestra, but also an opportunity to show the high-quality performance of the orchestra musicians. Four of the ten concerts were joined by Chinese clarinetist Tony Shen, with whom we performed the Mozart Clarinet Concerto.”

The core of the concert repertoire included the suites from the “Masquerade” and “Spartacus” ballets by the prominent Armenian composer Aram Khachaturian; ballet excerpts from “The Nutcracker” by Tchaikovsky; “Romeo and Juliet” by Prokofiev, the symphonic suite “Scheherazade” by Rimsky-Korsakov, Tchaikovsky: “Symphony No.5”.

The ANPO tours were widely covered by the Chinese press, namely the periodicals “Chinadaly”, “Chinanews”, “China.org.cn”, “Sohu.com”, “Xinhuanet”. At the press conference in Beijing the tour operator Rey Armstrong confessed: “Armenia has amazing classical composers whose music is full of national color. And this orchestra (the ANPO) is one of the best orchestras in Eastern Europe today. I will be very excited to promote new Armenian projects in China as well as the introduction of Chinese culture in Armenia.”

The tours were also full of exciting episodes, including a flash mob organized in the city of Xiamen: String and flute musicians performed a piece by Khachaturian's "Masquerade" in the city center. The passers-by have responded enthusiastically to the flash mob.

The final concert of the tour was held on January 9 at Beijing China National Arts Center.

The National Philharmonic Orchestra of Armenia toured China with the support of the agencies of Armstrong International Music (China) and Wright Music Management (England), the RA MoESCS, with the participation of the Armenian Embassies to China and to Armenia, and the RA Ministry of Foreign Affairs.