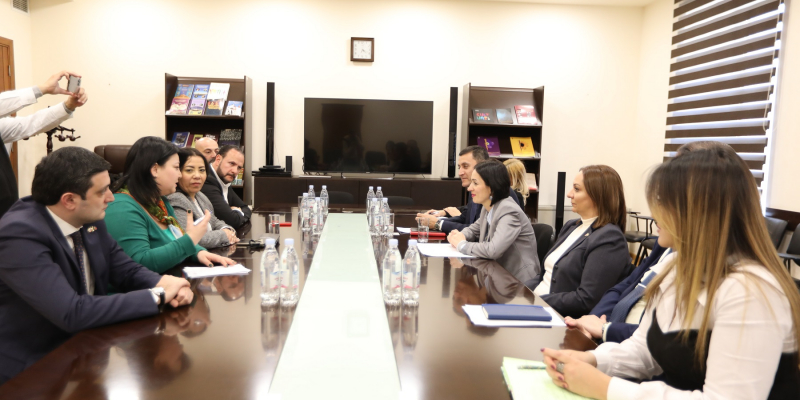 RA ESCS Minister Zhanna Andreasyan received the delegation headed by the Chair of the Mexico-Armenia Friendship Group of the Chamber of Deputies of Mexico Berenice Juarez Navarrete. ESCS Deputy Minister Arthur Martirosyan and RA Ambassador Extraordinary and Plenipotentiary to the United States of Mexico N.G. Armella Shakaryan attended the meeting․

The sides discussed issues of promoting cooperation in the fields of education, science, culture and sports, the importance of experience exchange in various sectors.

ESCS Minister Zhanna Andreasyan, highlighting the importance of strengthening friendly relations between the two countries, noted that last September the delegation of the ESCS Ministry took part in the UNESCO “World Conference on Cultural Policies and Sustainable Development” in Mexico City and returned with positive impressions and great expectations for cooperation.

Minister Zhanna Andreasyan noted that a practical program on “Cultural cooperation for 2023-2026 between the Ministry of Education, Science, Culture and Sports of the Republic of Armenia and the Ministry of Culture of the United States of Mexico” has been developed and is currently at the stage of internal mutual agreement, which will provide an opportunity to carry out joint activities and various events.

The Chairman of the Mexico-Armenia Friendship Group of the Chamber of Deputies of Mexico Berenice Juarez Navarrete, in turn, thanked for the warm welcome and hospitality, underlining that 2023 marks the 31st anniversary of the establishment of bilateral diplomatic relations between Armenia and Mexico, therefore, the advancement of cooperation, especially in the fields of culture and education, is of particular importance.

The Mexican side also noted that they are particularly impressed by the activities of the Tumo Center for Creative Technologies in Armenia, which can become a good example for the educational systems of all countries.

“We will definitely try to localize it in Mexico,” said the Chairman of the Mexico-Armenia Friendship Group.

During the meeting, Zhanna Andreasyan also spoke about the humanitarian crisis that arose as a result of the blockade of Nagorno-Karabakh, and the problems of violation of the right to education, which leave irreversible consequences for human rights. The Minister also touched upon the issue of preserving the Armenian cultural heritage of Nagorno-Karabakh, which is currently under the control of Azerbaijan.

During the meeting, a number of other issues related to the implementation of educational and cultural events, the advancement of cultural tourism, joint work programs, the exchange of experience, and the promotion of communication were also touched upon.