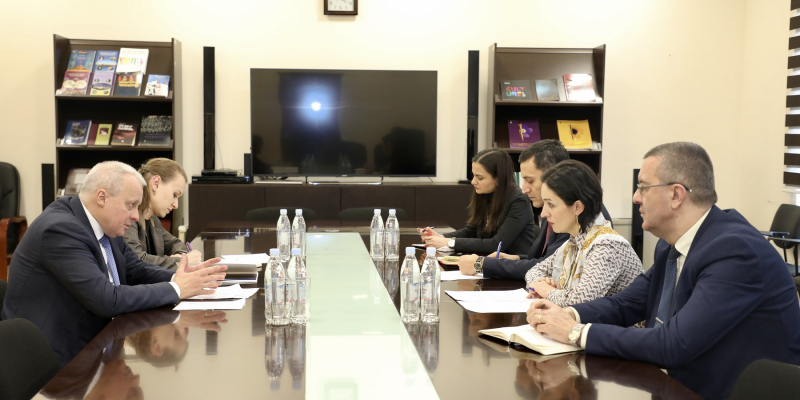 Sergey Kopyrkin congratulated Zhanna Andreasyan on her appointment to the post of Minister, wishing her success in this important and responsible position.

The ESCS Minister noted that cooperation in the fields of education, science, culture and sports occupies a special place in the interstate relations of Armenia and Russia. The continuity of joint programs and the implementation of new sectoral initiatives are a priority on the agenda. As an important component of cooperation, Minister Zhanna Andreasyan stressed the consistent implementation of bilateral programs in the format of events, exchange of experience, and joint cultural and sports events. The importance of fostering cooperation in the fields of science and education was also underlined: in this regard, a reference was made to the scholarship programs in the field of higher education, within which the youth of the Republic of Armenia gets the opportunity of free education in higher educational institutions of the Russian Federation.

Noting that the continuous implementation of existing initiatives in the fields of coordination of the ESCS Ministry will contribute to the advancement of Armenian-Russian cooperation, the Russian Ambassador expressed willingness to promote the implementation of joint programs and enhance the cooperation between the ministries and sectoral structures of the two countries. Sergey Kopyrkin highlighted the importance of engagement of the civil society and the youth in joint Armenian-Russian projects, in particular, sports, cultural and educational events. In this context, the upcoming joint concert of the famous pianist of the Russian Federation Denis Matsuev and the State Symphony Orchestra of Armenia, which will be held in Yerevan at the Aram Khachaturian Concert Hall, was emphasized.

The parties also touched upon the anniversary programs of Aram Khachaturian-120, Armenian Cinematography-100, S. Rachmaninoff-150, F. Chaliapin-150 in 2023 and discussed the possibilities of organizing joint events in Armenia and Russia.

During the meeting, the ESCS Minister raised the issue of the humanitarian crisis caused by the blockade of Nagorno-Karabakh and violations of the right of children to education, recalling that since December 12, 2022, the Republic of Azerbaijan has blockaded the Lachin Corridor - the only road connecting Nagorno-Karabakh with the Republic of Armenia and the whole world, as a result of which the humanitarian crisis has irreversibly impacted all sectors, especially the education of children.

In response, Russian Ambassador Sergey Kopyrkin informed that the Russian side is concerned about the current situation and is taking consistent steps towards resolving the conflict.