“I call on to undertake all the appropriate measures to assist the children of Nagorno-Karabakh”: Zhanna Andreasyan addresses to the Executive Directors of the UNICEF and United Nations World Food Program 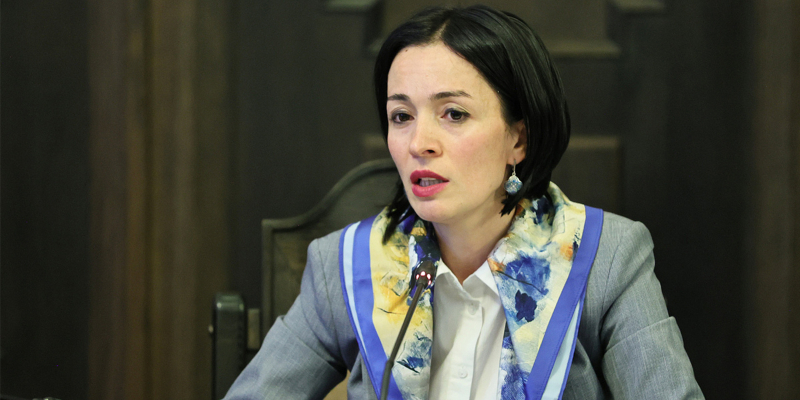 Minister of Education, Science, Culture and Sports of RA Zhanna Andreasyan addressed official letters to the Executive Directors of the United Nations Children's Fund (UNICEF) Catherine Russell and the United Nations World Food Program (UNWFP) David Beasley. The ESCS Minister raised the issue of the humanitarian crisis caused by the blockade of Nagorno-Karabakh and the violation of the right to education, which has an irreversible impact on human rights

Reminding that since December 12, 2022, the Republic of Azerbaijan has blockaded the only road linking Nagorno-Karabakh to the Republic of Armenia and the entire world, about which Zhanna Andreasyan had informed the UNICEF Executive Director in her previous letter, the Minister reiterated the irreversible consequences of the humanitarian crisis.

“Many schoolchildren and students who were in Armenia attending some exchange programs are not able to return to Nagorno-Karabakh to continue their education in their fellow institutions. Though, the Ministry of Education, Science, Culture and Sport of the Republic of Armenia has ensured all the measures to continue their education in the relevant institutions in Armenia, there was still a tangible violation of their right to education given the differences of syllabus and school curriculum. The right of the children to grow up in a family is also being violated. Dozens of unaccompanied minors are stranded in Armenia or Nagorno-Karabakh while their parents are on either side of the Lachin corridor”, noted the Minister in, in particular, emphasizing the urgent need for the right to mental health and family reunification.

“We are witnessing a real catastrophe in both humanitarian and development contexts in the Nagorno-Karabakh because of an almost month-long blockade. To ensure the inalienable right of children to grow up in a safe environment, to take decisive steps to provide all the necessary conditions for them to exercise their rights is becoming imperative day by day. I would like to draw your kind attention to these issues and request to UNICEF to undertake all the appropriate measures to assist the children of Nagorno-Karabakh,”- Zhanna Andreasyan concluded the letter addressed to the Executive Director of the United Nations Children's Fund (UNICEF) Catherine Russell.

In the letter addressed to the Executive Director of the United Nations World Food Program (UNWFP) David Beasley the ESCS Minister emphasized that due to the insufficient food supply, since January 9, 2023, 56 preschool groups in 30 schools and 16 schools with after-care, as well as 41 kindergartens in Nagorno-Karabakh have temporarily suspended their operation. As a result, 6498 students were deprived of their right to education: “Moreover, due to the lack of energy supplies, the operation of transport has been disrupted, which has also negatively affected the educational processes in schools in rural areas, where teachers who reside in other regions are unable to attend classes. Dozens of students from Nagorno-Karabakh studying in vocational educational institutions of Armenia, who were visiting Nagorno-Karabakh before the blockade, are unable to return to Yerevan and continue their studies. In the meantime, over 270 children are currently unable to return to their families in Nagorno-Karabakh and are temporarily fostered in Armenia. All in all, in result of the hostile acts by Azerbaijan, the rights and freedoms of about 22000 children of Nagorno-Karabakh have been violated”.

Emphasizing that the violation of the right to education is unacceptable and must be strictly condemned, the ESCS Minister stressed that the international community should urgently and efficiently respond to Azerbaijan’s violations of international humanitarian law, and take appropriate measures to restore freedom and security of movement to and from Nagorno-Karabakh and to address the humanitarian needs of its people.

“In this dire situation, I call on the swift engagement of UNWFP, as a specialized humanitarian agency, to utilize all available tools under its disposal to assist the children of Nagorno-Karabakh and ensure their right to education,” is stated in the letter.