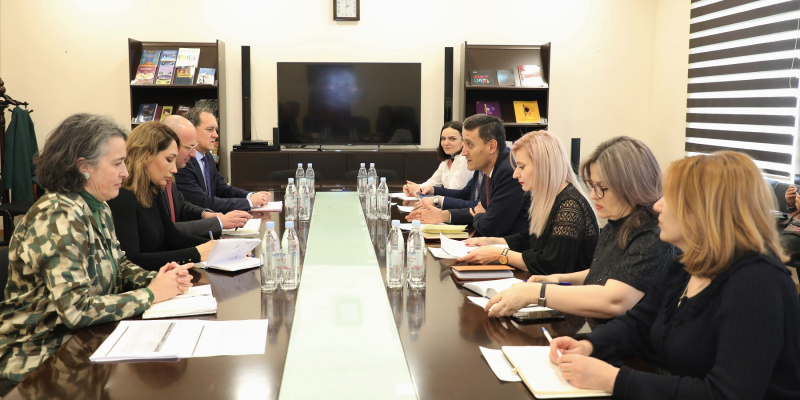 Prospects of cooperation, ongoing and planned programs were discussed at the meeting.

“The “RA Education Development State Program until 2030” has been approved, and following the approval of the action plan we will hold discussions with development partners and begin a new stage of cooperation for the implementation of the program,” noted the Deputy Minister, adding that cooperation with the European Investment Bank is expected in this regard.

Arthur Martirosyan informed that the “RA Education Development State Program until 2030.” has been developed in the following strategic directions: universal inclusiveness, creating a learner-centered educational environment and enhancing the efficiency of education. The program covers all levels of education, starting from preschool to higher education. The Deputy Minister also noted that a three-month deadline has been set for the approval of the action plan.

Thankful for the reception, the head of the European Investment Bank Regional Representation for the South Caucasus Maciej Czura stressed that in the context of the EU-Armenia dialogue, the field of education is one of the priorities.

“All directions of education are among the main scopes of our Bank's investment activity in Central Europe. We pay great attention to the field of education and provide not only financial but also expert support,” noted Maciej Czura and expressed willingness to cooperate in the direction of additional and continuing, as well as informal education.

Deputy Minister of Education, Science, Culture and Sports of the Republic of Armenia Araqsia Svajyan presented the reforms due to the introduction of a new standard of general education, as well as priority tasks and directions for the development of primary and secondary vocational education.

It was noted that within the framework of EU funding programs, issues of introducing a new educational model in Syunik and localization of a new standard of general education are being considered. A reference was made to the launch of the new cooperation with the European Investment Bank, within the framework of which renovation, modernization and re-equipment of Syunik Regional and Goris State Colleges are planned.

ESCS Deputy Minister Araqsia Svajyan highlighted the importance of reaching an agreement on investment programs in two colleges of Syunik region, stressing that the field of primary and secondary vocational education is one of the important strategic directions.

The parties discussed the prospects of other possible cooperation with the European Investment Bank.