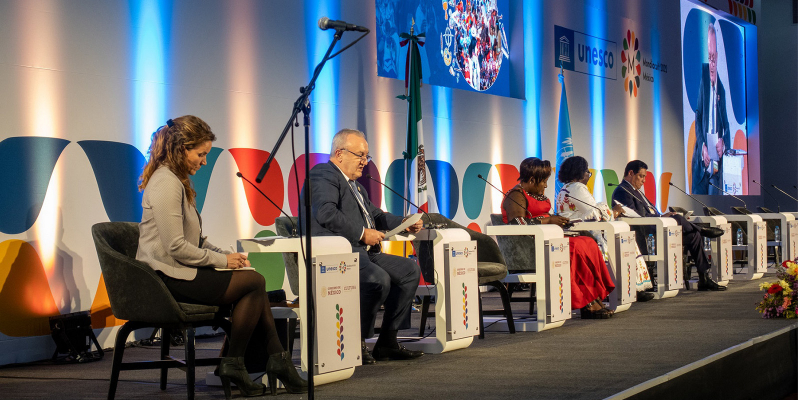 From 28 to 30 September, the Delegation headed by the RA ESCS Minister Vahram Dumanyan is participating in the UNESCO World Conference on "Cultural Policies and Sustainable Development" in Mexico City. The Armenian delegation includes Deputy Minister Alfred Kocharyan and Head of the Department for Cultural Heritage and Folk Crafts Astghik Marabyan.

On September 29, Vahram Dumanyan delivered a report at the UNESCO “World Conference on Cultural Policies and Sustainable Development", in the thematic session “Heritage and Cultural Diversity in Crisis”.

“I have the honor to welcome you to the UNESCO “World Conference on Cultural Policies and Sustainable Development” and express my deepest gratitude to the Government of the United Mexican States for the reception.

The topic of "Heritage and Cultural Diversity in Crisis" is extremely important and often requires international engagement. The issue of preserving the Armenian cultural heritage in the territories of Nagorno-Karabakh (Artsakh), currently under the control of Azerbaijan, is very important for Armenia.

After November 9, 2020, more than 2,000 Armenian historical and cultural monuments, as well as 12 state museums and galleries with 21,000 exhibits came under the control of Azerbaijan. There are serious concerns about the preservation of these historical sites, given the well-known and documented practice of systematic destruction of the Armenian cultural heritage in its territories over the past few decades, like in the case of Nakhijevan. Azerbaijan pursues the policy of eliminating the historical evidence of the Armenian presence in Artsakh and in the surrounding territories by deliberately destroying Armenian monuments and cultural sites.

After the 44-day war of 2020 in Artsakh, Armenia is constantly informing the international community about the situation in Nagorno-Karabakh and on the border. On September 13, 2022, Azerbaijan launched large-scale military aggression in several directions of the Armenian-Azerbaijani border, as well as in the cities of Goris, Jermuk, Vardenis, Kapan, Sotk and adjacent villages of the Republic of Armenia.

The Azerbaijani aggression has led to hundreds of human losses, including the civilians of Armenia. Due to Azerbaijan's war crimes on the sovereign territory of the Republic of Armenia, the rich cultural heritage of the target regions, including more than 500 monuments, and 14 museums with 45,000 exhibits, is currently under threat.

According to the data collected by the Office of the Human Rights Defender of Armenia, at least 7,600 people have already been displaced from Gegharkunik, Vayots Dzor and Syunik marzes. These people are now deprived of their basic rights, including the right of access to culture, which contradicts the UN Universal Declaration of Human Rights (Article 27), which states that everyone has the right to participate in the cultural life of the community, to enjoy the arts and to share in scientific advancement and its benefits.

Thus, the solution to this issue and the implementation of the UNESCO technical mission to Nagorno-Karabakh and adjacent territories become more urgent.

Heritage and cultural diversity should be an important part of the peace process. Hence, I call on international partners to have their voice and contribution to the preservation of the millennial Armenian cultural and religious heritage in Armenia and Nagorno-Karabakh.

I want to emphasize that heritage is recognized as an important factor for sustainable development, dialogue and peace. We firmly believe that respect and tolerance for cultural and national identities will secure a peaceful and sustainable future for nations to create and enrich world heritage. Thank you.”

It should be added that the Conference was attended by high-ranking representatives of the United Kingdom of Great Britain and Northern Ireland, Ukraine, Ecuador and other countries, as well as the representatives of the International Center for the Study of the Preservation and Restoration of Cultural Property.