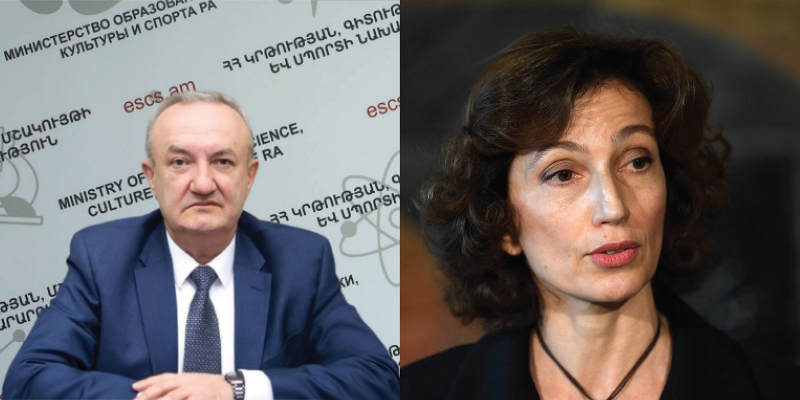 RA ESCS Minister Vahram Dumanyan has addressed an official letter to the Director-General of the United Nations Educational, Scientific and Cultural Organization (UNESCO) Audrey Azoulay, presenting the large-scale military aggression and its consequences, unleashed by Azerbaijan on September 13, 2022, on the sovereign territory of the Republic of Armenia.

In the letter, it is stated that during the aggression, the Azerbaijani Armed Forces targeted not only the military positions but also civilian infrastructure. In particular, according to the data collected by the RA Human Rights Defender Office, at least 7,600 people were displaced from Gegharkunik, Vayots Dzor and Syunik regions. The vast majority of displaced people are women, children and the elderly, including people with disabilities.

As a result of the military aggression unleashed by Azerbaijan, the educational process in general education and preschool institutions was interrupted due to the need to ensure the safety of children and employees. As a result, 24873 school children of 172 schools and 5808 preschool children of 69 kindergartens studying in Syunik, Gegharkunik, and Vayots Dzor regions were deprived of the right to education and a prosperous future. The activities of extracurricular educational institutions, colleges and universities operating in these regions are also under threat.

RA ESCS Minister noted that targeting students, teachers and institutions is a gross violation of international human rights and the right to education, and is unacceptable under any circumstances and should be strictly condemned.

In the letter, RA ESCS Minister Vahram Dumanyan appealed to Audrey Azoulay to respond to the serious threat caused by the Azerbaijani military aggression and condemn such hostile actions of Azerbaijan, thereby contributing to the prevention of further violations of the fundamental principles of the UNESCO mandate and ensuring the rights to education, the rights of the forcibly displaced population, the protection of civilians and civilian infrastructure.

A special report prepared by the RA Human Rights Defender is also attached to the letter.