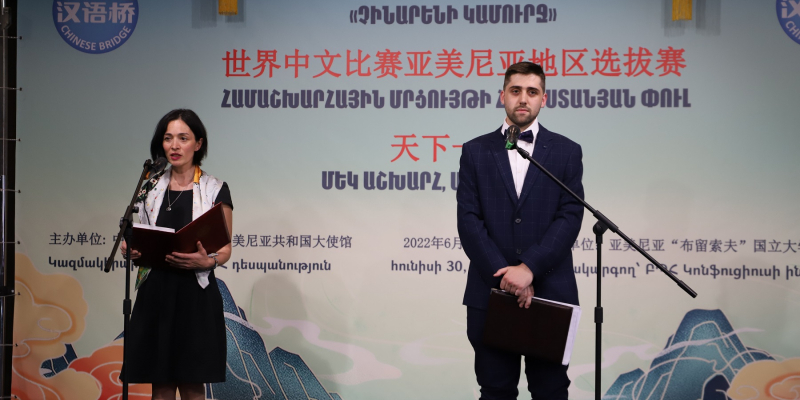 The concluding event of the Armenian stage of the annual international competition "Chinese Bridge" was held.

The “Chinese Bridge” Contest in Armenia is annually organized within the close cooperation between the Embassy of the People's Republic of China in Armenia and the “Confucius Institute” of V. Brusov State University.

Besides students and high school pupils, elementary school children also participated in the Armenian stage of the competition this year. 15 candidates were elected out of more than 60 participants.

ESCS Deputy Minister Zhanna Andreasyan also attended the concluding event of the competition and wished success and new victories to the participants. Expressing her gratitude to the Embassy of the People's Republic of China in Armenia for holding such an important event, the Deputy Minister highlighted the importance of Armenian-Chinese bilateral relations.

“The wide scope of cooperation programs between our countries, which includes student exchange programs, expansion of cooperation in education, science, and technology, the activities of the Armenian-Chinese Friendship School in Yerevan, conducting training programs and organizing joint events, is a priority for the RA ESCS Ministry. The citizens of Armenia have the opportunity to study at the top universities in China, where, by acquiring relevant knowledge and skills, they also contribute to the development of our country,” stated Zhanna Andreasyan.

Ambassador Extraordinary and Plenipotentiary of the People's Republic of China to Armenia Fan Yong welcomed the participants and expressed gratitude to the teachers of Chinese in Armenia for the devoted work and dissemination of the language. The Ambassador also noted that this year marks the 30th anniversary of diplomatic relations between China and Armenia. According to the Ambassador, the teaching and studying of Chinese in Armenia is advancing, and the number of Chinese language learners and the interest of Armenian youth in Chinese culture is growing, which, in turn, contributes to the strengthening of the centuries-old friendship of the two ancient countries-Armenia and China.

“The annual “Chinese Bridge” competition is a great event for the learners of Chinese, and this year's theme is “One World, One Family”. It has become the most important platform for foreigners to learn Chinese and get to know China,” noted Ambassador Extraordinary and Plenipotentiary of the People's Republic of China to Armenia.

The “Chinese Bridge” contest is held in 4 stages: in the 1st stage, the participants take a written exam, in the 2nd stage answer the jury's questions, in the 3rd stage prepare a speech in Chinese, and in the 4th stage present a cultural act.

It should also be noted that the winners of the competition will go to China to participate in the final stage. The student stage of the “Chinese Bridge” international competition is being held in Armenia for the 9th time, and the school stage for the 7th time. The winners were also awarded multifunctional digital devices provided by the Chinese Embassy in Armenia.