Armenian culture in the scope of the German professor: the presentation of the book "Armenian Panorama: Nature, People, Culture" is held
Education 23 June 2022 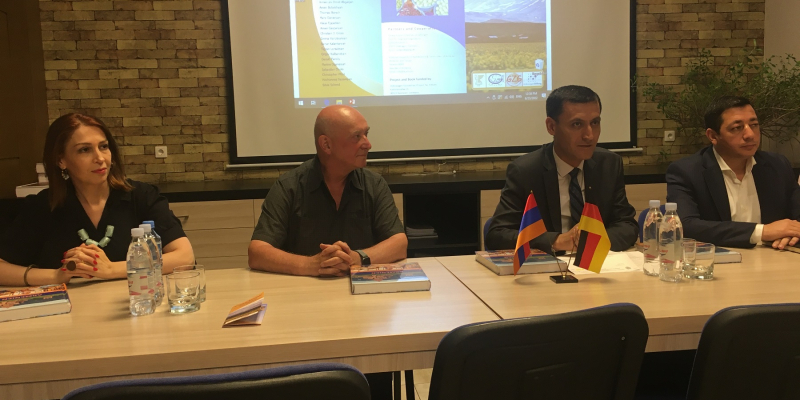 Artհur Martirosyan participated in the presentation of the book “Armenian Panorama։ Nature, People, Culture” by Doctor, Professor of the “Georg-August” University of Göttingen Siegfried Sigismund.

The event, which took place at the National University of Architecture and Construction of Armenia, was attended by the Rector of the University Yeghiazar Vardanyan, as well as the teaching staff and students.

The book was published with the assistance of the “Volkswagen” International Research Foundation within the framework of the "Stone in Armenian Architecture" program launched in 2019, dedicated to the preservation of stone buildings and Armenian heritage․

ESCS Deputy Minister Artհur Martirosyan congratulated the participants and the author personally for this important work of Armenian studies, which brought together representatives of education, science and culture․

“We hope that the renowned scientist will continue his work on the study and dissemination of Armenian culture, and in the near future, we will have opportunities to participate in the presentation of new and interesting works. I especially emphasize the fact that the work is carried out in cooperation with the National University of Architecture and Construction of Armenia which is one of the best universities in Armenia,” said Arthur Martirosyan.

The book entitled “Armenian Panorama: Nature, People, Culture” presents the fascinating aspects of Armenia and the Armenian people, giving foreigners the opportunity to discover Armenia, and get acquainted with the culture, nature, population, natural and historical monuments, etc.

According to the author - Siegfried Sigismund, the book was initially intended to be published as a scientific work, and then it was decided to expand the scope and include different aspects of study. The professor thanked the supporters and the Armenian specialists for their efforts and successful completion.

The book also touches on the geological evolution of Armenia, archaeological heritage, spiritual and secular architecture, winemaking and other sectors of culture. There are also 100 reasons why one needs to love Armenia.