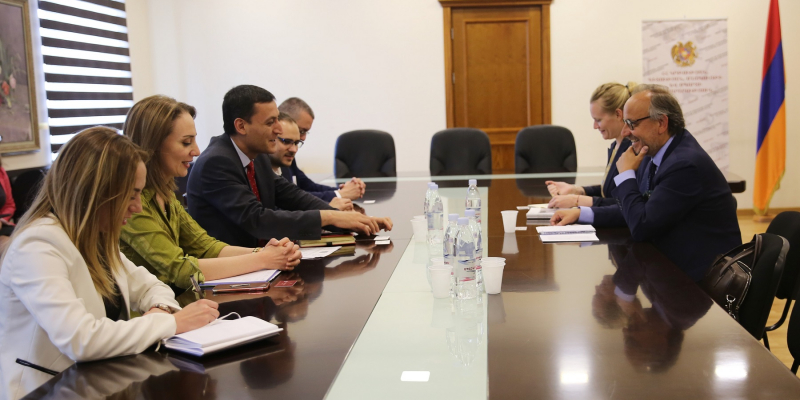 RA ESCS Deputy Ministers Arthur Martirosyan and Alfred Kocharyan held a meeting with the Executive Director of the International Alliance for the Protection of Heritage in Conflict Areas Valery Freland and ALIPH Project Manager Elsa Uritzverea.

The meeting was also attended by Varduhi Sahakyan, Head of the UNESCO and Multilateral Cultural and Educational Cooperation Division of the Department for Multilateral Policy and Development Cooperation of the RA Ministry of Foreign Affairs.

During the meeting, Deputy Ministers Arthur Martirosyan and Alfred Kocharyan highlighted the importance of cooperation with the International Alliance for the Protection of Heritage in Conflict Areas and expressed willingness to present relevant programs for further cooperation.

In turn, Valery Freland presented the activities of the Alliance, stressing that it was founded in 2017 on the initiative of France and the United Arab Emirates, aimed at protecting cultural heritage in conflict and post-conflict territories. According to him, the alliance is funded by eight countries (France, UAE, Saudi Arabia, Kuwait, Luxembourg, China, Morocco, Monaco) and four private donors.

It was noted that since its foundation, the Alliance has carried out activities in about 30 countries, providing financial and scientific assistance for the protection and restoration of various monuments, museums and their collections, manuscripts and archives, as well as intangible heritage.

According to Valerie Freland, the Alliance is considering the possibility of involving the French "Œuvre d'Orient" NGO (a non-government organization for the restoration of Christian monuments) in the programs of renovation of cultural monuments in Artsakh.

Valery Freland stated that the Alliance aims to implement the following programs in Armenia: with the assistance of the French National Heritage Institute (Institut national du patrimoine) and together with Armenian and French specialists, the renovation of “Anapat” monastery of the 17th-18th centuries in the Syunik region and the implementation of works on the preservation, strengthening and digitization of Armenian historical and cultural institutions in Armenia.

Other issues of mutual interest were also discussed during the meeting.