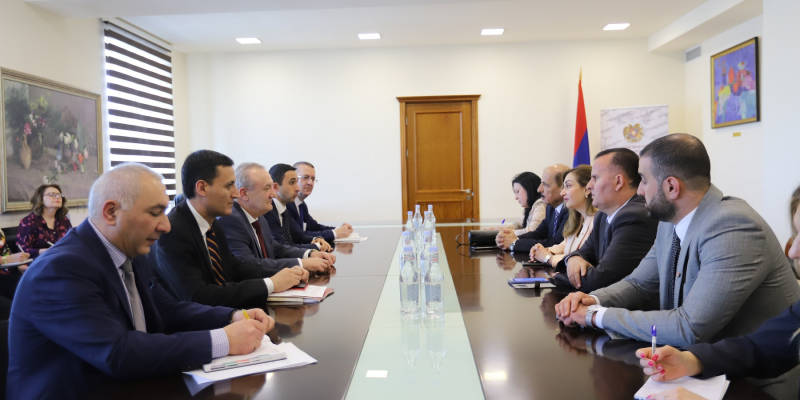 The delegation included Deputy Chairman of the Parliamentary Friendship Group Talal Al-Khalil, Speaker of the group Yasser Al Salamah, official, responsible for administrative issues of the Public Relations Department of the People's Assembly Manazel Hassan, Charge d'affaires of the Syrian Embassy in Armenia Alathba Ahmad Hassan, and others.

Welcoming the members of the Parliamentary Friendship Group, Vahram Dumanyan emphasized that the Ministry coordinates various fields, and in this context, it is necessary to consider the possibility of implementing cooperation programs in the fields of education, science, culture, sports and youth. The Minister stated that there is a wonderful Armenian community in Syria, which is of exceptional importance for our country, serving as a kind of bridge.

Vahram Dumanyan underlined the importance of advancing friendly relations with Syria, and suggested considering the possibility of signing a memorandum of cooperation between the two countries, giving it new meaning and significant results.

In turn, the head of the Syria-Armenia Friendship Group Lucy Iskanyan noted that promising young people are the hope and driving force of any country, noting with satisfaction that much attention is paid to their issues in Armenia. According to her, despite the challenges caused by the war, scientific and educational institutions operating in Syria have never ceased their activities. Lucy Iskanyan proposed to upgrade the agreement between the two countries, in particular, on the issue of mutually granting student scholarships.

Stating that mainly young Armenians-Syrians study at Armenian universities, Vahram Dumanyan expressed hope that the universities of our country will be attractive to Syrian students, which will further strengthen the ties between the two states. According to the Minister, both countries have gone through a war: “Wars and human cruelty are a consequence of the lack of proper education. The most powerful weapon is education and culture, which should be presented to the world.”

During the meeting, the parties also highlighted the importance of advancing student exchanges and strengthening communication among the youth. An agreement was reached, according to which the working groups will develop a draft memorandum of cooperation between the two countries.