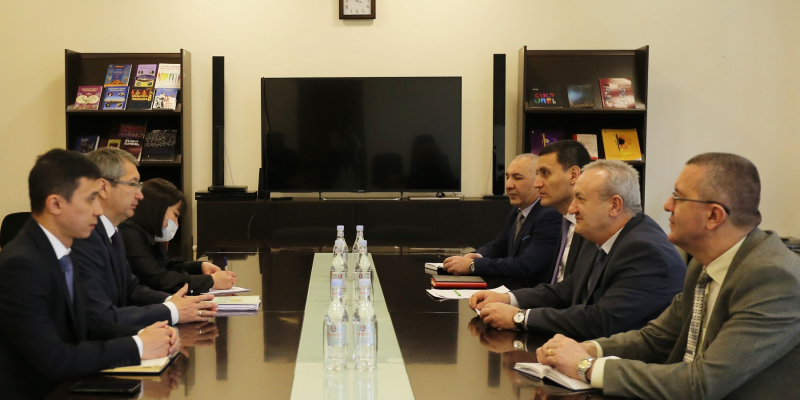 RA Minister of Education, Science, Culture and Sports Vahram Dumanyan received today the Delegation headed by Ambassador Extraordinary and Plenipotentiary of the Republic of Kazakhstan to the Republic of Armenia Bolat Imanbayev. The meeting was also attended by the ESCS Deputy Minister Arthur Martirosyan.

Welcoming the Ambassador, Vahram Dumanyan highly appreciated the cooperation between the two countries, emphasizing that the 30th anniversary of the establishment of diplomatic relations between the Republic of Armenia and the Republic of Kazakhstan is marked by expanding and enhancing friendly relations in bilateral and multilateral dimensions. The Minister stated that the Armenian-Kazakh cooperation is developing dynamically in the fields of education, culture and other sectors under the coordination of the Ministry, and expressed willingness to contribute to the further advancement of this cooperation.

Vahram Dumanyan especially emphasized the importance of the possibility of sustainable development of interuniversity cooperation through the implementation of joint educational and research programs, as well as exchange programs for students and teachers. He emphasized that almost all the leading universities of Armenia are already cooperating with partner organizations in Kazakhstan.

The Minister stressed that several world-class events will be held in Armenia this year: the European Boxing Championship, the 33rd International Biology Olympiad, and the “STARMUS-VI” Science and Art Festival, in which representatives of Kazakhstan are expected to participate.

Ambassador Bolat Imanbayev, in turn, noted that the two countries have great potential for further advancement of relations, which is based on interstate cooperation agreements in the fields of education, science, sports and culture. He expressed gratitude to the ESCS Ministry for holding the events initiated by the Kazakh side last year in Armenia at a high level. The Ambassador informed that various events are also scheduled this year as part of the 30th anniversary of the establishment of diplomatic relations between the two countries.

The parties expressed willingness to advance the cooperation in the field of science in terms of implementing new scientific programs and initiatives, and also underlined the need to implement joint activities in the fields of culture and sports.

During the meeting, a reference was made to the efficient activities of the Armenian Diaspora in Kazakhstan.