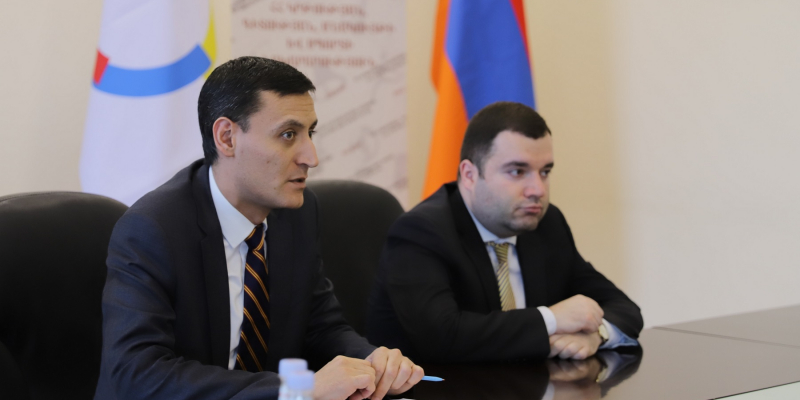 Deputy Ministers of Education, Science, Culture and Sports Arthur Martirosyan and Karen Trchunyan held a meeting with Francophonie Ambassadors in Armenia. Ambassadors and Charge d'affaires of 13 countries attended the meeting.

Welcoming those present, ESCS Deputy Minister Arthur Martirosyan thanked the Ambassadors of France and Lebanon for the initiative of the meeting. Arthur Martirosyan congratulated the participants of the meeting on the International Francophonie Day celebrated on March 20, as well as on the 10th anniversary of Armenia's membership in the International Organization of La Francophonie.

He informed that, as in previous years, this year events dedicated to La Francophonie will be organized in general education institutions of Armenia, universities, music and art schools, and libraries. According to the Deputy Minister, the most significant event within the framework of the two-month Francophonie events is the concert of the famous Canadian singer Garou, which is scheduled on April 21 and 22 at the Sports and Concert Complex after K. Demirchyan.

Artհur Martirosyan confirmed that the ESCS Ministry, faithful to the commitment of the main mission of Francophonie, constantly makes efforts towards this mission, that is the protection of democracy and human rights, the promotion of the French language and cultural and linguistic diversity.

“We are happy to become a part of the international community of La Francophonie: La Francophonie is not only a separate direction for us but also an opportunity to attract new resources for the development of education and culture and foster the ongoing reforms. In the near future, we plan to develop a certain format for coordinating Francophone programs to make them more compatible.”

ESCS Deputy Minister Karen Trchunyan reaffirmed that the Ministry will do its best to enhance the cooperation in the fields of education, science, culture, sports and youth, as well as to expand and advance the Francophonie agenda.

Ambassador Extraordinary and Plenipotentiary of Lebanon to Armenia Maya Dagher, who heads the group of the Francophonie Ambassadors, said that the group was formed in 2018 during the preparatory work for the Francophonie Summit. She underlined that Armenia is also part of the countries that share the values of the Francophonie movement, and the group is ready to assist our country in advancing efficient cooperation.

In turn, the Ambassador Extraordinary and Plenipotentiary of France to Armenia Anne Louyot noted that this year a very rich and intensive program is envisaged within the framework of the two-month-long events of the Francophonie. According to her, it is planned to develop a roadmap for Francophonie, which will include issues of promoting French language teaching in the education system of Armenia and strengthening the values of Francophonie.

The Ambassadors and Charge d'affaires present at the meeting presented their proposals for expanding cooperation in the fields under the coordination of the ESCS Ministry and outlining new programs.