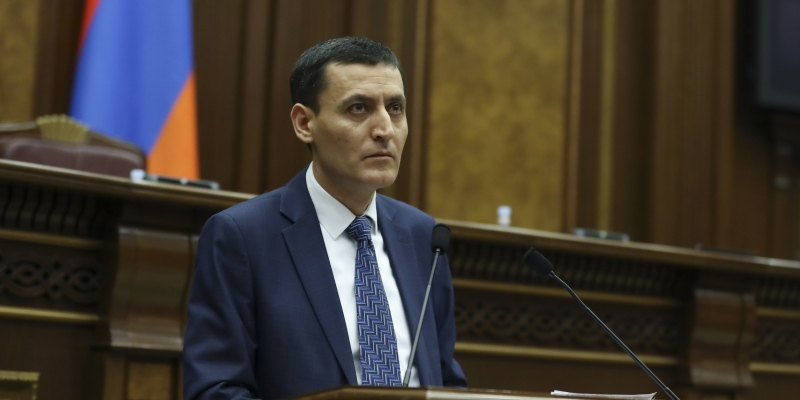 The Deputy Minister presented the general content and implementation of the program in Armenia.

““Horizon Europe” EU Framework Program for Research and Innovation is the world’s largest funding program in science with a budget of €95.5 billion. EU countries are the members of the program, and other states can participate as associate members. The organizations of the associate member states have almost the same opportunities to participate in competitions in the frame of the program as the EU full member States,” stated A. Martirosyan in his speech.

Three pillars of the “Horizon Europe” Program are:

This is the initiative that followed the “Horizon 2020” Framework Program, to which Armenia has been an associate member since 2016.

The “Horizon Europe” program is based on the principles of the "Open Science Policy" and the "Common European Research Area", the main objective of which is to make the leading scientific infrastructures of the EU accessible to the scientific communities of the participating countries and to stimulate expanded participation in modern advanced research and innovation projects.

The program is aimed at enhancing joint efforts to create and disseminate new knowledge and technologies, with the promotion of international scientific and innovative cooperation as a key principle.

As presented by A. Martirosyan, the priorities of the program include issues of universal significance:

A. Martirosyan also presented the experience and achievements of the past years: “The Republic of Armenia has been associated with the previous EU “Horizon 2020” program since 2016. During 2016-2020, 312 applications were submitted with the participation of scientific groups of Armenia, of which 35 were granted funding, receiving funding for about €4 million. The list of organizations participating in the program is headed by the National Academy of Sciences of the Republic of Armenia with its institutes, Yerevan State Medical University, the American University of Armenia, the Russian-Armenian (Slavonic) University, as well as several departments and other organizations.”

A. Martirosyan informed that, based on the existing potential in the field, as well as on the priority of integration into the European Research Area of the research infrastructures of the Republic of Armenia, the RA Ministry of Education, Science, Culture and Sports submitted an official application to the European Commission in 2020, announcing its intention to start negotiations on the terms and conditions of Armenia's membership in the “Horizon Europe” program. The negotiations started in June 2021 and ended on September 15, 2021. The agreement was signed on November 12 in Brussels. On the Armenian side, the Head of the Representative Office of the Republic of Armenia in the European Union and Ambassador Extraordinary and Plenipotentiary to the Kingdom of Belgium Anna Aghajanyan signed the Agreement, on the EU side the Agreement was signed by the Deputy Director-General of the European Commission for Research and Innovation Signe Ratso.

Several measures have already been taken by the Republic of Armenia to activate the country’s participation in the program and increase the success rate. In particular, in August 2021, the “Center for the Promotion of Scientific and Innovative Partnership” Foundation (formerly “Center for the Promotion of the Integration of Scientific Programs”) was reopened, the main objectives of which are to collect and analyze relevant information on grant programs, provide consultations, as well as to facilitate the participation of scientific organizations and universities of the Republic of Armenia in the new “Horizon Europe” Framework Program, coordination of the activities of national contact persons of the program, organization of information events and consultations. Several informational events have already been held aimed at raising the awareness level of beneficiaries and developing the capabilities of national contact points. The Foundation cooperates with the Armenian offices of the German company GIZ and CIVITTA consulting companies in organizing the events. The activities carried out by the Foundation are coordinated in advance with the RA Science Committee.

“Participation in the “Horizon Europe” program will ensure the continuity of the process of integration into the European Research Area of the scientific system of the Republic of Armenia, which is considered a priority and is included in the RA Government program for 2021-2026 and in the list of measures ensuring its implementation (The activities envisaged in the direction of “Development of favorable infrastructures for competitive scientific activity” of the “Science” section in the direction of European Framework Programs and stimulation of Armenia's active participation in these programs),” introduced A. Martirosyan.

Armenia has assumed financial commitments under the Agreement.

It should be noted that participation in the program has been open for the Republic of Armenia, as well as for other full or associate member countries since January 1, 2021.

During the discussion in the "question and answer" format, proposals were also made on the implementation of various mechanisms to boost the activity of scientists to participate in the program, to advance the beneficiaries' capacities to develop high-quality applications, to foster cooperation with the European countries.

The importance of submitting an annual report on the outcomes of the work carried out was highlighted to raise public awareness.