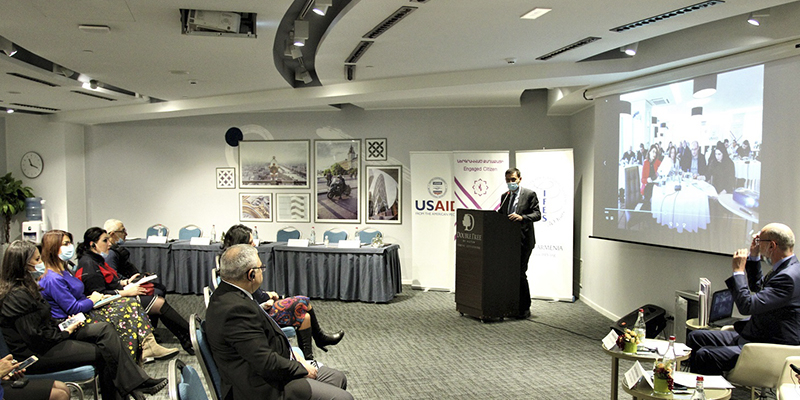 RA Deputy Minister of Education, Science, Culture and Sports Arthur Martirosyan attended today the signing ceremony of the memorandum on the implementation of the "Engaged Citizen" training course between the Armenian office of the International Foundation for Electoral Systems (IFES) and several universities of the Republic of Armenia.

According to the Deputy Minister, it is hard to overestimate the role of civic education for a country following the path of democratic development, when the consistent development of state institutions, democratic mechanisms, solving the challenges facing the state and society presupposes an active civic position and engagement.

“This awareness is the basis of the education system, regardless of its format. The basis of the state general education and subject standards, which are currently being implemented in the formal education system, is the development of civic and democratic capabilities. As an outcome, we expect that the student will not only be aware of the participation in the formal processes, but will also be ready to exercise their rights and responsibilities in real life, take responsibility, and become active participants in the decision-making process at different levels. In the higher education system, it is also important to develop capacities through separate courses, and we are glad that the “Engaged Citizen” program has successfully passed the piloting phase, as a result of which 6 more universities are joining the project,” stated Arthur Martirosyan, noting happily that the program targets not only the students of specific specialties but the entire student community.”

“I am glad that in close cooperation with the ESCS Ministry, this program has been developed according to the methodology based on academic approaches, and by its nature, including interactive learning, is in line with the approaches and policies of the organization of student-centered learning,” noted Arthur Martirosyan. He expressed hope that the program will further expand and advance throughout the university system.

The participants of the event were also welcomed by IFES Country Director for Armenia Jerome Leyraud, Acting Mission Director of the USAID Office for Democracy and Governance Julie Perkowski, and Rector of the Public Administration Academy of the RA Khachatur Ghazeyan.

The course, which is already implemented in 5 universities: Yerevan, Shirak, and Vanadzor State Universities, Armenian State University of Economics, and Yerevan Brusuv State University of Languages and Social Sciences, will provide an opportunity through an innovative teaching approach to introduce students to the fundamental principles of democratic governance, civil society, and participation, human rights, using modern methods of interactive learning. It will be available to students as an elective course or, according to the decision of the university, an elective credit course and will cover the topics adapted to the reality of civic education. Classroom interactive teaching methods will be used as modern approaches to voters’ education and civic awareness. To raise the level of awareness of social issues, students will be involved in extracurricular activities as well as in public service, which is important in the communities. As a result, within the course, the students will be taught the knowledge and skills necessary for effective engagement, as well as strengthening democratic principles.