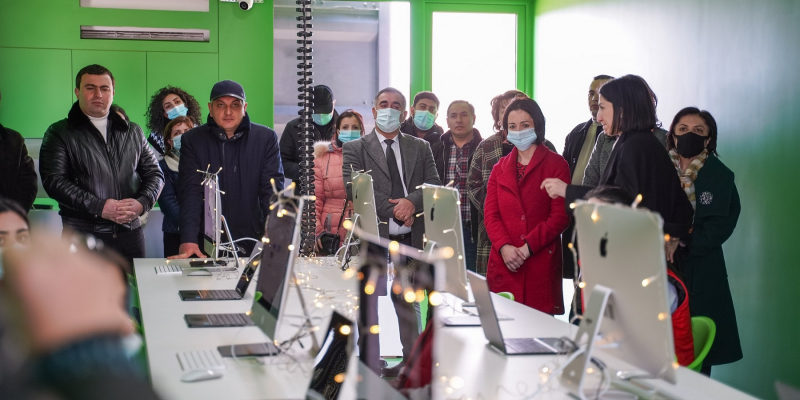 The “Tumo Armenia” initiative, aimed at expanding the Tumo educational program in Armenia and Artsakh, has already been launched. Owing to the donations of the benefactors who joined the initiative, the opening ceremony of Tumo Boxes was held today in 3 cities of Armenia: Kapan, Vayk and Sevan.

RA ESCS Deputy Minister Zhanna Andreasyan was present at the official opening of the Box in Sevan. The Box was placed in the neighborhood of Sevan Basic School №3. In Gegharkunik region, the first box was opened almost a year ago in the city of Gavar, this being the second box in the region.

Deputy Minister Zhanna Andreasyan welcomed the simultaneous opening of three Tumo Boxes in different sites and expressed confidence that soon the impact of the Centers on the advancement of the educational system will be significant. “I consider it very important to open the box in the neighborhood of the school. This means that we have to make every effort to bring the school and the Tumo curriculum in line with their usage as resources and learning environments. I am sure we will soon find additional ways of collaboration, to effectively implement the created opportunities, resources, and the environment," stated Zhanna Andreasyan, expressing gratitude to the initiators and the benefactors.

300 students have already enrolled in the Sevan Tumo Box: some of them came to get acquainted with the Center. The student coaches presented their experience of the Tumo Center, the work done, projects implemented in the fields of drawing, programming, music, etc. The experienced Tumo students advised the youth of Sevan not to be afraid and to acquire as much knowledge as possible from the Tumo educational programs.

The Tumo Boxes in the cities of Kapan, Vayk, and Svean were opened with the assistance of Lara Arslanian, Karapet Partagchyan, Sarin Semerchyan, and unnamed benefactors; Armine and Ara Tavityanov, and anonymous benefactors respectively.

Note that the objective of the “Tumo Armenia - a five-year, $50 million” initiative is to offer its leading-edge educational programs to all teens throughout Armenia and Artsakh. For the coming years, it is planned to have 16 equipped Tumo Centers in large cities of the regions, and 110 Tumo Boxes in small communities, which will enable the program to serve 80 thousand students.

Tumo Centers have all the facilities for organizing an educational program: self-learning activities, courses, workshops, support of international specialists. Tumo Boxes are technically equipped Mini Tumo easily deployed at any small community. Students living near a TUMO Box will go through the self-learning phase at their closest TUMO Box before being transferred to the nearest TUMO center for in-person training.