The Exhibition “Breath of God: Armenia and the Bible” to be organized at Washington Museum of the Bible
Culture 14 December 2021 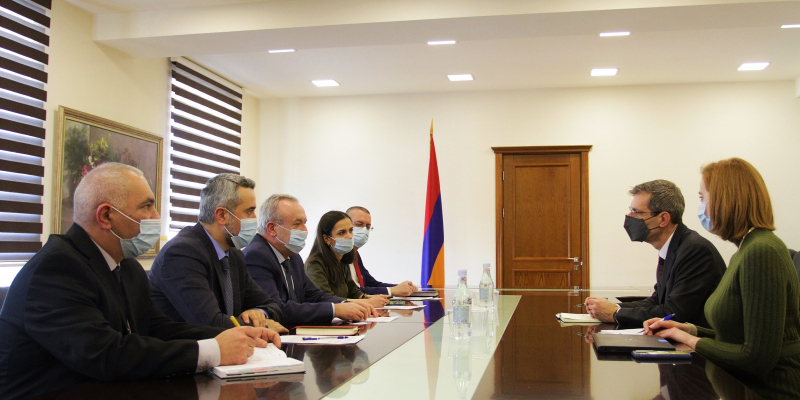 During the meeting, issues related to the organizational work of the exhibition “Breath of God։ Armenia and the Bible” scheduled at the Washington Museum of the Bible were discussed.

Welcoming the guests, the Minister highlighted the importance of organizing the exhibition scheduled for 2023 and expressed willingness to advance the collaboration between the Washington Museum of the Bible and the museums of Armenia to enhance the cultural dialogue.

Representatives of the Washington Museum of the Bible briefly presented the program of the exhibition, noting that it is scheduled to be held in the United States in 2023, in cooperation with the Ministry of ESCS of the Republic of Armenia, Matenadaran after Mesrop Mashtots, the Armenian Genocide Museum-Institute, and the Etchmiadzin Cathedral Museum.

“We aim to present to the public of the United States of America the history of Armenia and the Armenian people in the context of the commitment to Christianity and biblical values," said Jeff Klohan, Chief Coordinator of the Washington Museum of the Bible.

The American guests noted that the exhibition “Breath of God: Armenia and the Bible" will tell about the path of Armenia as the first Christian country, the path of the Armenian people, from Noah's Ark to the conversion to Christianity, the invention of letters, Bible translation, church rituals, Armenian Genocide, Artsakh war, emphasizing the core values of the Bible and Christianity.

Deputy ESCS Minister Ara Khzmalyan suggested convening a scientific conference in parallel with the exhibition, within the framework of which the biblical layer of the Armenian cultural heritage will be presented. In this context, according to the Deputy Minister, it is also important to present the medieval Armenian miniature, where the biblical theme is widely represented.

Concluding the meeting, ESCS Minister Vahram Dumanyan underlined that it is important for Armenia to present the history of our country and people to the advanced world, noting that the proposed exhibition is an effective means in this regard. The guests noted that they are impressed with the Armenian historical and cultural heritage. They will use the opportunity of the visit to Armenia to better get acquainted with the Armenian culture.