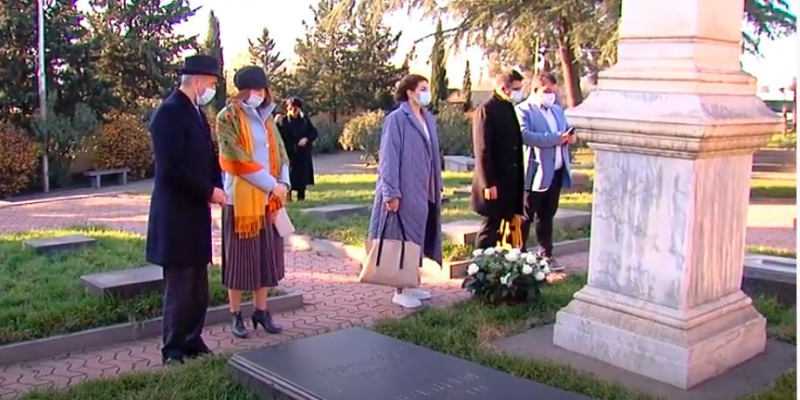 On the initiative of the RA Ministry of Education, Science, Culture, and Sports, the delegation headed by Deputy Minister Ara Khzmalyan is on a working visit to Georgia on December 6-8.

The members of the working group are the Head of the MoESCS Department for Cultural Heritage and Folk Crafts Astghik Marabyan, Director of “Armenian State Philharmonic Hall” SNCO Artyom Naghdyan, Director of the “National Center for Aesthetics” Vahan Badalyan, actress and artistic director of “Hamazgayin State Theatre after Sos Sargsyan” Narine Grigoryan.

The aim of the visit is to advance the Armenian-Georgian cultural ties, discuss issues of mutual interest in the fields of contemporary art, preservation of cultural heritage, as well as issues of further cooperation.

During the working visit, the delegation headed by Deputy Minister Ara Khzmalyan had a meeting with the First Deputy Minister of Culture, Sports, and Youth Affairs of Georgia Kakha Sikharulidze. During the meeting, various issues related to culture were discussed; preliminary agreements were reached on cooperation in the fields of archeology, the film industry, museums, theater, and cultural education.

According to Ara Khzmalyan, it is very important to come up with joint initiatives, which will give an opportunity to get better acquainted with the culture of the neighboring country.

“Global challenges, geopolitical conditions, cultural priorities have changed, and we really need to get to know the culture of our two countries in the best possible way, to develop mechanisms to compare the cultural policy of our two states,” noted Ara Khzmalyan and stated that as a start of cooperation, it was proposed to restore and renovate Vahan Teryan house-museum in Gandza by joint efforts with the involvement of professional expert groups, stimulate cooperation between archaeologists, organize joint exhibitions on the rich cultural heritage of the two countries.It should be noted that during the visit, the Armenian delegation visited the "Khojivank" pantheon of Armenian writers and public figures in Tbilisi, then had a meeting with the head of the Diocese of the Armenian Apostolic Church in Georgia Vardapet Kirakos Davtyan in the Cathedral Church of St. Gevorg.