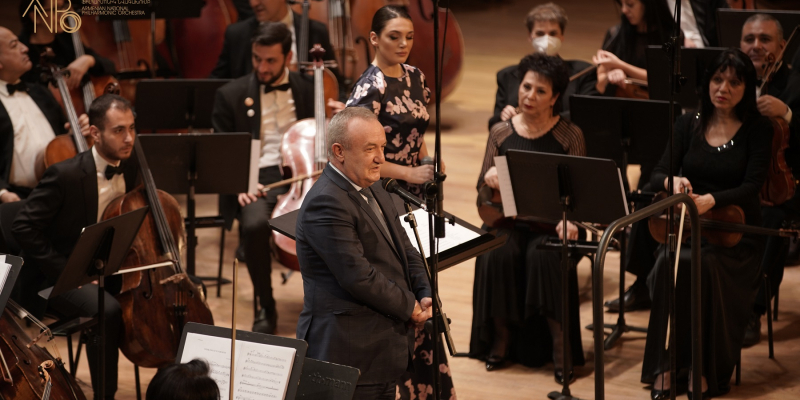 In his opening remarks, Vahram Dumanyan highlighted the significant contribution and the heritage of the great son of the Armenian nation, Henri Verneuil in the history of French cinema, as well as his invaluable efforts to popularize and condemn the Armenian Genocide. Welcoming the high-ranking Armenian and French guests, Vahram Dumanyan expressed satisfaction with the opportunity to host Henri Verneuil's family members.

Verneuil's son, film director, screenwriter, actor Patrick Malakian, and the actor for the role of Abgar in the film " Mayrig" Jackie Nersisyan were present at the concert.

During the concert, the Armenian National Philharmonic Orchestra performed the music of films by Henri Verneuil (Artistic Director and Chief conductor - Eduard Topchyan). The song "Dle Yaman" was performed, with a solo performance by the duduk player Levon Minasyan, who lives in Marseille. He performed this song in Verneuil's famous film "Mayrig".

The event aims to pay tribute to the memory of the famous French-Armenian filmmaker, to present Verneuil’s creative heritage, to assess his place and role in the world of film art, and to identify the peculiarities of his national identity.

It should be noted that the 100th anniversary of the renowned French filmmaker and playwright of Armenian origin Henri Verneuil is included in the UNESCO calendar of anniversaries of eminent personalities and important events for 2020-2021.

The organizers of the event are the National Cinema Center of Armenia and the Armenian National Philharmonic Orchestra.