Culture as a way of economic development: the “EU4Culture” program to be implemented in the regions
Culture 16 November 2021 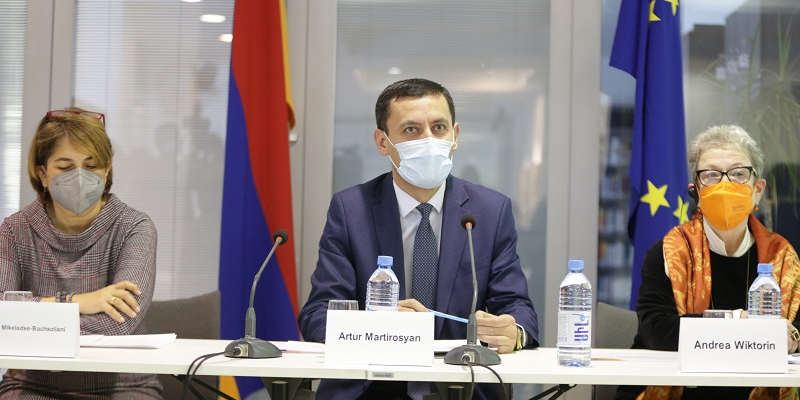 The “Goethe” Center in Yerevan hosted the official notification and awarding ceremony of the three cities of Armenia selected within the framework of the “EU4Culture” program for the development of the cultural strategy of the community.

EU4Culture is a four-year program funded by the European Union that promotes the cultural sector, focusing on the regional cities of the Eastern Partnership countries. The grant application competition launched in May 2021 and will run until December 2024. The selected three cities -Sevan, Charentsavan, and Ijevan - will receive a grant for 30,000 euros to develop a cultural development strategy, then the best cultural strategy of the Local Self-Government body will be selected for its implementation in this community for 300,000 euros.

The goal of the “EU4Culture” program is to promote the role of culture as an engine for growth and social development across the region, to help regional cities advance the economy through culture, strengthen cultural and creative ties.

In his greeting speech, RA ESCS Deputy Minister Arthur Martirosyan, welcomed the participants, underlining the importance of implementing the “Eu4Culture” program in Armenia within the framework of proportional territorial development in terms of activating cultural life and cultural activities in the regions, providing cultural products to the community residents and involving them in the creation of cultural products, emphasizing the role of the Local Self-Governing body in this regard: “I want to emphasize the importance of the "EU4Culture" program as it is distinguished by the fact that it emphasizes the special role of the Local Self-Government bodies in terms of activating cultural life in its communities and adjacent settlements.”

As a specific feature, the Deputy Minister stressed the competitive nature of the program: “I am sure that in terms of healthy competition, in addition to the cultural strategy in the three cities, we will provide an example of the cultural strategy for the Local Self-Government bodies, which can be a prototype for other communities of the Republic of Armenia. The existence of a culture development strategy will contribute to providing a favorable environment for the full expression and realization of the creative abilities of this community, broad public participation in cultural life, fostering the connection between culture and education, monetization of culture, which, among other issues, will increase the tourist attractiveness of these communities.”

According to the Deputy Minister, the implementation of the program in at least 5 Eastern Partnership countries will provide an opportunity for study tours, exchange of experience, advancement of international cooperation, and cultural dialogue.

Deputy Minister Arthur Martirosyan expressed his gratitude to his colleagues for supporting the program, congratulated the selected communities, and, on behalf of the ESCS Ministry, confirmed the willingness to provide longstanding assistance to the advancement and implementation of the cultural strategy implemented by the Local Self-Government bodies.

The Ambassador of the EU Delegation to Armenia, Andrea Victorin, congratulated the participants and stressed that culture is the driving force of economic development, and it is necessary to combine culture with the creative industry. A. Victorin wished good luck to the selected cities: "You are to decide with what vision you want to advance your culture. This program will promote the development of cultural strategy throughout the country.”

The representatives of the selected cities expressed their enthusiasm and assured that they will achieve tangible results in contributing to economic development through cultural programs.