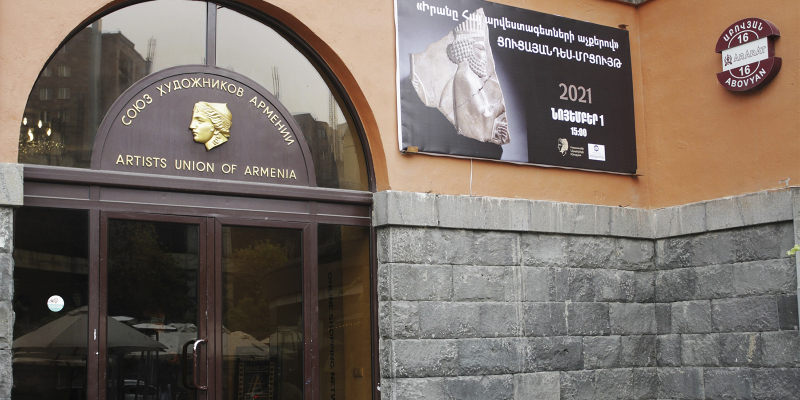 The exhibition of the Armenian artists "Iran in the Eyes of Armenian Artists" opened in the hall of the Artists’ Union of Armenia.

According to the Chairman of the Artists’ Union of Armenia Suren Safaryan, the day is significant because the work of many months is summarized and the foundation of new ideas and programs is laid.

“The Union of Artists highlights the importance of collaborations with various institutions because they enable to find new ties, new platforms for sharing the experience of artists of the two countries, organizing joint exhibitions, making friendship. Today our exhibition is vivid proof of that: the Armenian painters of different ages have depicted Iran with their ideas and literature. 7 participants will later have the opportunity to go to Tehran, see with their own eyes and create in Armenia for a new exhibition with their impressions and materials,” noted Suren Safaryan, adding that he had held numerous meetings and discussions with Seyed Hossein Tabatabaei, Advisor of the Cultural Center of the Islamic Republic of Iran in Armenia, who expressed willingness to make the joint programs long-standing.

The Ambassador Extraordinary and Plenipotentiary of the Islamic Republic of Iran to the Republic of Armenia Abbas Badakhshan Zohuri thanked the parties for organizing such an exhibition, emphasizing that the relations between Iran and Armenia come from the depths of centuries, which have always been warm and friendly. The Ambassador highlighted the importance of advancing the level of mutual recognition on the part of the two countries and the organization of such exhibitions.

RA ESCS Deputy Minister Ara Khzmalyan also congratulated the participants on the opening of the exhibition and noted that the exhibition is unique since Armenian artists have depicted the picture of Iran, which was formed under the influence of literature, music, and other fields of culture; shortly our artists will be given the opportunity to discover Iran in Iran.

“I am happy to state that our cultural ties have been intensifying recently: At the beginning of the year, the National Center for Aesthetics implemented a joint program in Meghri; a screening of Iranian films has recently been held in a packed hall. Today we are opening this wonderful exhibition,” noted Ara Khzmalyan and highlighted the importance of bilateral cooperation between the public structures.

Welcoming the art lovers, the Adviser of the Cultural Center of the Embassy of the Islamic Republic of Iran in the Republic of Armenia Seyed Hossein Tabatabaei thanked for organizing a joint exhibition and added that the artists professionally presented the rich culture of Iran.

It should be noted that within the framework of the exhibition, a memorandum was signed between the Artists’ Unions of Armenia and the Islamic Republic of Iran.