The photo exhibition "Faces of the Great Victory" is opened 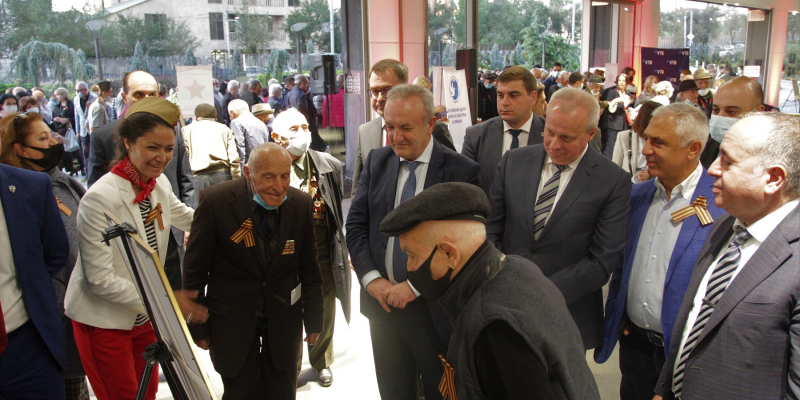 The photo exhibition "Faces of the Great Victory" was organized by the “Dom Moskvy” in Yerevan (Russotrudnichestvo in Armenia) with the support of the Russian Embassy in Armenia together with the “Tovmasyan” Foundation, funded by “VTB Bank” Armenia. The project is dedicated to the veterans of the Great Patriotic War.

“The exhibition is a tribute to the veterans of the Great Patriotic War, as well as means to preserve the historical memory and transmit the truth about these events to further generations. Photographer Tatev/Azatui Mnatsakanyan traveled to more than 50 cities and villages in Armenia, visiting the most remote regions and photographed the faces of 110 veterans in order to preserve the image of each of them in history. The project is dedicated to the 80th anniversary of the Great Patriotic War in memory of this historical event,” stated Ambassador Extraordinary and Plenipotentiary of the Russian Federation to Armenia Sergey Kopyrkin during the official ceremony of the exhibition.

Addressing to the veterans, RA Minister of Education, Science, Culture and Sports Vahram Dumanyan stated that generations are proud of them, their victory.

“Dear veterans, I am thrilled to see you here to celebrate our victory together. You won World War II, the Great Patriotic War. I wish you became the last generation of veterans before whom we would bow down so that your glorious history would close the page of wars. However, the Great Patriotic War was not the last one, and now we have different generations of veterans. Be sure that this new generation of veterans is the result of your upbringing, they have grown up following your example. Your victory in the Great Patriotic War became an example for these young people, taught them to defend their homeland to the end. Wars are never welcome, but in case they are imposed, it is necessary to achieve victory in the name of the Motherland. I wish you health, longevity, we love you all," said the Minister.

Head of the Department for Cultural and Historical Projects of the Russian House in Yerevan Andranik Arzumanyan noted that based on the results of Tatev Mnatsakanyan's work, an album has also been published with the financial support of “VTB Bank” Armenia.

Tatev Mnatsakanyan expressed gratitude to all the organizers of the project, especially to the veterans: “Some of the heroes are no longer alive, but they remain with us thanks to the photos. Dear veterans, you are a miracle, while communicating with you it turned out not just a photo shoot, but every moment spent with you became a part of my life. In the photos I wanted to convey the spirit of victory that you bear in you. I am very grateful and bow to you.”

Deeply grateful for the event, the Chairman of the Union of Veterans of Armenia Simon Yesayan handed a certificate to the photographer on behalf of the organization.