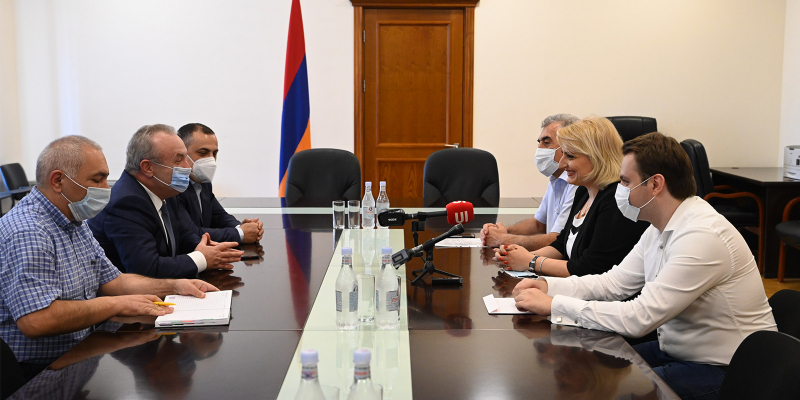 Every victory in the sports world is extremely important in terms of giving a positive spirit to the Armenian society and instilling confidence.

The ESCS Minister congratulated and expressed his gratitude to Elina Danielyan for the historic victory and for giving the feeling of pride to the Armenian people. “I am deeply honored to host you. I am grateful and proud of the victorious feelings you presented to all of us. The Armenian society needs positive energy and restoration of self-confidence. In this regard the role of your exceptional victory is invaluable. I am sure the vibes of this victory will be transferred to other fields as well. I thank everyone who had their contribution. Of course, the last move belongs to the individual, and the victory is personified, but it is also the result of long-lasting teamwork.”

Elina Danielyan told that she has always felt the support of her compatriots on the winning path. The European champion expressed hope that her victory will be an impetus for other success. “The fans have given me great strength with their support and daily letters. Everyone helped me, including the head coach of the Armenian women's national team, Zaven Andriasyan. I want to thank everyone for their contribution. We are going through difficult days, and I think we needed such joy. I hope that this victory will contribute to greater victories.”

During the meeting ESCS Minister Vahram Dumanyan inquired from the representatives of the Chess Federation of Armenia about the upcoming programs, discussed further development perspectives of the sport in our country. Smbat Lputyan, first Deputy Chairman of the CHFA stressed that there are young people with great potential in both men's and women's chess, who can achieve success in the future.

Smbat Lputyan also noted that the role of chess in the modern world and the importance of chess thinking is emphasized, and it is no coincidence that many countries are interested in Armenia's experience of including chess in the educational curriculum.

ESCS Minister Vahram Dumanyan assured that the Ministry is ready to promote programs of the Chess Federation of Armenia, aimed at advancement and development of Armenian sports, and jointly solve the existing issues.