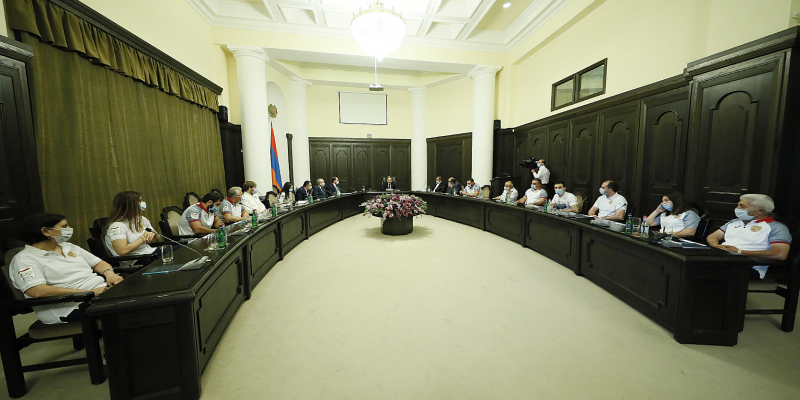 Prime Minister Nikol Pashinyan expressed gratitude to the participants of the Olympiad for the worthy representation of the Republic of Armenia and noted: “Of course, the situation, the atmosphere existing in the country has its impact on our athletes, on sports in general, but I think that in this situation we were able to properly present ourselves. Of course, in some cases, we were very close to winning an Olympic gold medal, but I think that our athletes and our team properly represented the Republic of Armenia at the Tokyo Olympics. For more successful performances, we must do the following: very quickly summarize the results of what has already happened and directly prepare for the next tournament. I think the ESCS Ministry together with the Olympic Committee, must form a roadmap for determining and implementing our plans on the eve of the next Olympic Games starting from today.”

ESCS Minister Vahram Dumanyan noted that the attention of the State and the Government towards the sports issues and athletes is increasing, and the Ministry will take the necessary steps to ensure the best training environment for athletes.

Summing up the performances of the Armenian team at the Summer Olympic Games in Tokyo, ESCS Deputy Minister Karen Giloyan noted that these were the 7th Summer Olympic Games in the history of independent Armenia to participate, and the 3rd in terms of quality of medals. He referred to the current issues, including those of the referees, which need to be discussed and understood, and find means of counteracting.

President of the National Olympic Committee of Armenia Gagik Tsarukyan also emphasized the importance of teamwork in terms of delivering the work between the Government, the Olympic Committee and the sports federations, and moving forward with joint efforts.

Nikol Pashinyan once again emphasized that it is necessary to draw conclusions and focus on further actions from today. “Our management should be strategic. If we have set a goal for Armenia to have 24 Olympic gold medals by 2050, then we must start to act from today and not deviate from the targets.”

During the meeting, the athletes and coaches referred to the results of the Olympic Games, thanked the Government and the Prime Minister for support and noted that everything has been done to properly represent the Republic of Armenia at the Olympic Games.

The upcoming activities were discussed within the framework set by Prime Minister N. Pashinyan. Information was provided on the construction process of sports schools named after famous athletes, works done for the development of gymnastics, shooting and improvement of sports infrastructures.

ESCS Minister Vahram Dumanyan reported that based on the instruction of PM Pashinyan, the issue of reopening a sports unit in the Armed Forces is under process.

On the instruction of the Prime Minister, an agreement was reached to organize a meeting with the participation of the Ministry of Education, Science, Culture and Sports, ANOC and the national sports federations in the near future to discuss the short and medium-term activities.