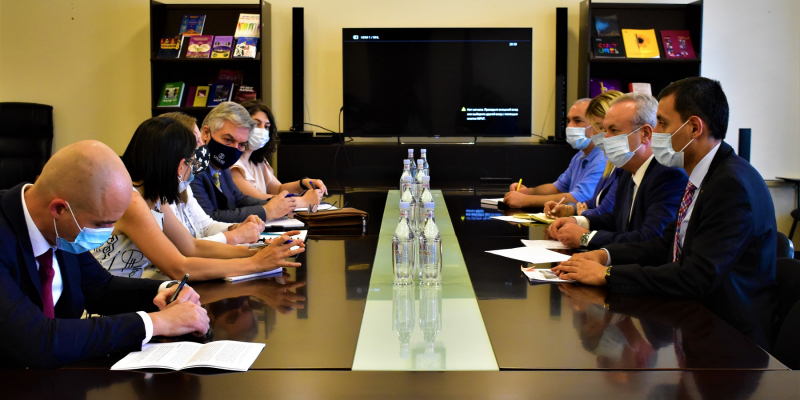 RA Acting Minister of Education, Science, Culture and Sports Vahram Dumanyan received Ambassador Extraordinary and Plenipotentiary of the United States of America to the Republic of Armenia Mrs. Lynne Tracy. ESCS Deputy Minister Arthur Martirosyan, the newly appointed USAID Armenia Mission Director John Allelo and Officer of the US Embassy in Armenia on political and economic issues Oleg Sokola․ Emphasizing the consistent development of Armenian-American bilateral relations in the fields of education, science, culture and sports, Acting Minister Vahram Dumanyan highlighted the need to advance the current cooperation programs and the implementation of new projects.

Among the projects implemented with the support of the American side in the field of education and science, Vahram Dumanyan highlighted the importance of the USAID-funded program "Strengthening the Inclusive Education System in Armenia”, the aim of which is to assist the ESCS Ministry in the process of implementing universal inclusive education system. Stressing the importance of extending the program until 2023, the Acting Minister underlined that the reforms of inclusive education are one of the core directions of Armenia's education policy.

Vahram Dumanyan also touched upon the cooperation with the US National Aeronautics and Space Administration (NASA), in particular, the signing of the memorandum with the GLOBE program in June. The Acting Minister expressed confidence that the GLOBE program, being an international scientific and educational environmental program, will best attract Armenian students and scientists to the international network to study the world environment and will contribute to the implementation of new joint initiatives, thereby contributing to the development of technological education in the Republic of Armenia.

Ambassador Lynne Tracy, confirming her willingness to continue and advance multilateral cooperation, also highlighted the engagement of Armenia in the "Global Learning and Observation to Benefit the Environment" (GLOBE) program of the US National Aeronautics and Space Administration (NASA).

“Given the multiple climate challenges facing the world, the innovative and interactive methods of recognizing and protecting the environment offered by the GLOBE program are more relevant today than ever," noted the Ambassador.

"We are confident that every possible measure taken by you will best contribute to the settlement of this sensitive and extremely important issue," said V. Dumanyan.

The US Ambassador stated that the issue is very concerning and is in the scope of their attention.

During the meeting, the parties also discussed Education USA and FLEX educational programs, higher education reforms, the activities of the American University in Armenia, as well as programs for the protection of historical and cultural monuments carried out with the assistance of the American side.