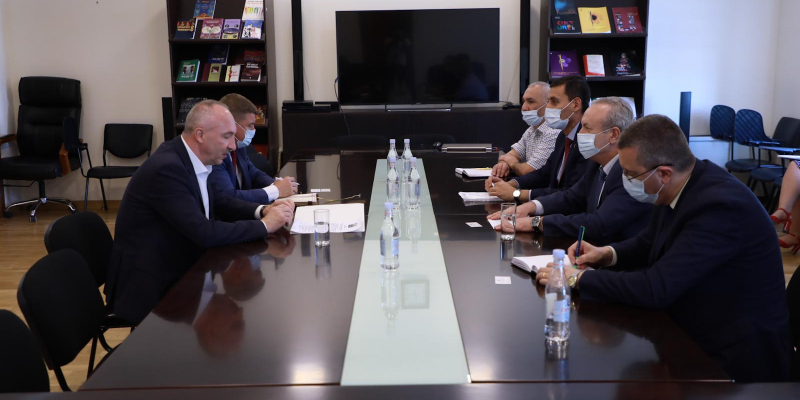 RA Acting Minister of Education, Science, Culture and Sports Vahram Dumamyan received today the Delegation headed by the Ambassador Extraordinary and Plenipotentiary of the Republic of Belarus to Armenia Alexander Konyuk. Deputy Minister Arthur Martirosyan also participated in the meeting.

Welcoming the Ambassador's visit to the Ministry and highlighting the importance of friendly cooperation between the two countries, V. Dumanyan expressed confidence that various practical steps will be outlined at the end of the meeting. The Acting Minister underlined the implementation of joint projects in the fields of education, science, culture, sports and youth and the possibility of exchanging experience.

Regarding the inter-university and scientific cooperation, Vahram Dumanyan underlined the importance of implementing educational and research programs, as well as student and teacher exchange programs, close cooperation in the field of information technology.

The Acting Minister also expressed willingness to develop cooperation in the field of culture, noting that in 2018 the program on “Cultural cooperation between the Ministries of Culture of the Republic of Armenia and the Republic of Belarus for 2019-2022" was signed, according to which the event of "Belarus Culture Days in Armenia" was organized on May 16-19, 2019. According to V. Dumanyan, it was planned to organize Armenian Culture Days in Belarus in 2020, which, unfortunately, didn’t take place due to the COVID-19 pandemic and the situation caused by the war. Taking into account the fact that the program is valid until the end of 2022, the Acting Minister suggested considering the possibility of organizing Armenian Culture Days in Belarus in 2022. Vahram Dumanyan also touched upon the possibility of signing a new program of cooperation between the two countries for the coming 4 years.

He drew the Ambassador's attention to the issue of preserving the Armenian cultural heritage in the territories controlled by Azerbaijan and suggested considering the possibility of creating a monitoring group, as a result of which Azerbaijan will refrain from destroying or distorting about 4,000 Armenian monasteries and cultural monuments in the region.

In the context of cooperation in the field of youth and sports, the Acting Minister suggested to consider the possibility of implementing joint summer camps, olympiads, training camps and other exchange programs among the youth of the two countries.

Ambassador Extraordinary and Plenipotentiary of the Republic of Belarus to Armenia Alexander Konyuk expressed gratitude for the quick response to their initiatives and proposals. He invited Vahram Dumanyan to Belarus to get acquainted with the activities of scientific, educational and cultural institutions of the country, in particular with the Belarusian experience in IT.

During the meeting, the parties also discussed other issues of mutual interest and reached an agreement on taking practical steps.