Armenian-French cooperation in the ESCS fields enters a practical stage 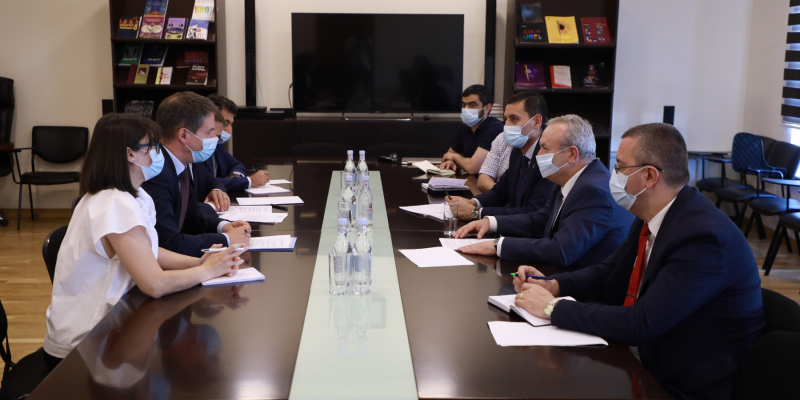 Welcoming the members of the French Delegation, the Acting ESCS Minister noted that this is the second meeting with the Ambassador, during which several practical issues will be discussed. Vahram Dumanyan, in particular, highly appreciated the activities of the French University in Armenia and noted that, as an educational-scientific and research platform, it best contributes to the development of the Armenian-French friendship and the creation of new opportunities. The Acting Minister reaffirmed the willingness of the Armenian side to support initiatives aimed at advancing the educational institution.

“If the University is eager to implement educational and scientific research programs, we will jointly promote the development of science in Armenia and ensure a dialogue between education and science. Therefore, it is necessary to do everything possible to generalize the chain from preschool education to science within the framework of the Armenian-French cooperation,” noted the Acting ESCS Minister.

Vahram Dumanyan also informed that with the financial support of the Central and Eastern European Office of the International Organization of la Francophonie (CREFECO), the ESCS Ministry, together with Alliance Francaise, will soon organize a summer school of La Francophonie in Armenia, the purpose of which is to further deepen the interest of Armenian schoolchildren in learning French and contribute to the development and advancement of the Francophone educational and cultural environment.

According to the Acting Minister, to best organize the summer school, the Ministry expects close cooperation with the French University in Armenia, the Armenian branch of the Francophone University Agency, and the French Educational Complex named after Anatole France.

In his turn, Ambassador Extraordinary and Plenipotentiary of France to Armenia Jonathan Lacotte noted that thanks to the development of the Faculty of Mathematics and Computer Science, it is envisaged that by 2025 the number of French University students in Armenia will double. He welcomed the proposal of the Armenian side to expand the research component in the University. According to the Ambassador, the best experience of the Armenian-French cooperation is also the activity of the French Educational Complex named after Anatole France and the introduction of advanced French language program in some secondary schools. According to Jonathan Lacotte, all these schools will receive support in the form of educational programs and textbooks: 5300 textbooks have already been provided. He was pleased to note that several high schools have also joined the program this year, which will ensure the continuity of the program of advanced French language training in grades 2-12.

At the end of the meeting, a reference was made to the possibility of restoring Armenian historical and cultural monuments in Armenia with the assistance of the French National Heritage Institute, within the framework of which training of specialists is also planned. The sides highlighted the importance of the above-mentioned activities, which will confirm the Armenian historical and cultural monuments as part of the universal heritage.