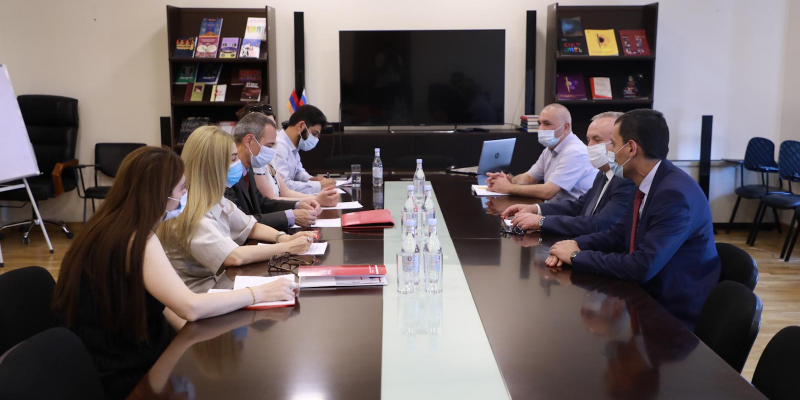 Welcoming the delegation, Vahram Dumanyan emphasized the importance of the humanitarian mission of the International Committee of the Red Cross and the activities carried out in Armenia over the past 30 years. The Acting Minister reaffirmed the necessity to ensure the continuity of the implemented joint programs and the willingness to further implement new programs. Vahram Dumanyan referred to the issue of Armenian captives in Azerbaijan after the Second Artsakh War, expecting the assistance of the International Committee of the Red Cross in their return to their homeland.

“The issue of our compatriots, imprisoned in Azerbaijan, is not in line with international human rights norms in the modern world in general. After all, there are rules that should apply to the entire world in the twenty-first century. Unfortunately, today life proves the opposite, and in this regard, we rely on the effective intervention of the International Committee of the Red Cross, which is the leading fighter in this struggle,” noted the Acting Minister.

The head of the Delegation of the International Committee of the Red Cross, Thierry Ribaux, in his turn, underlined that the meeting is a fine opportunity to present the activities of the organization in Armenia and discuss further cooperation.

Referring to the issue of the prisoners of the war, he noted that the Committee's staff periodically visits the detainees and also assists their families in exchanging information. Thierry Ribaux assured that the staff of the Committee is monitoring the detention conditions of prisoners of the war. According to him, the International Committee of the Red Cross is implementing various programs in Tavush, Gegharkunik and Syunik regions of Armenia to mitigate the direct impact of the hostilities on the residents of the border communities. In this context, he stressed that the Armenian ICRC Office, with the assistance of the ESCS Ministry and the Republican Pedagogical-Psychological Center, has launched a "Helping the Helpers" piloting program within the framework of which 12 psychologists of the Regional Pedagogical-Psychological Support Centers currently undergo a training. The trained psychologists, in turn, will train border school teachers (Syunik and Tavush regions) so that they can, first of all, provide corresponding psychological support to children to overcome the stress caused by the war. Parallelly with the launch of the program, the ICRC Armenian Office expressed a desire to sign a Memorandum of Understanding with the Ministry. Thierry Ribaux expressed hope that the program will be long-term and continuous so that the trained teachers will have the opportunity to share their skills and competencies with other specialists of the community. He also underlined the importance of providing psychological support to the displaced children. Thierry Ribaux presented for discussion the possibility of including the course of International Humanitarian law in university programs.

The Secretary-General of the Armenian Red Cross Society Anna Yeghiazaryan stressed that the State has recognized the supporting role of the structure, and in this context, there is a good experience of cooperation with the ESCS Ministry. She noted that 20 courses of first-aid training for schoolchildren and teachers of border communities have made them more resilient to overcome a number of challenges. According to Anna Yeghiazaryan, the Armenian Red Cross Society, together with its partners, has provided about 400 tablets to schoolchildren to ensure the access to education. In the near future, it is planned to provide another 560 such devices.

In response to the proposals of the partners, V. Dumanyan noted that the Ministry is ready to contribute to the implementation of the humanitarian mission of the International Committee of the Red Cross. He expressed willingness to discuss the issues of both psychological support and the possible inclusion of international humanitarian law courses in higher education programs. During the meeting a reference was made to the issue of ensuring the safety of schools.