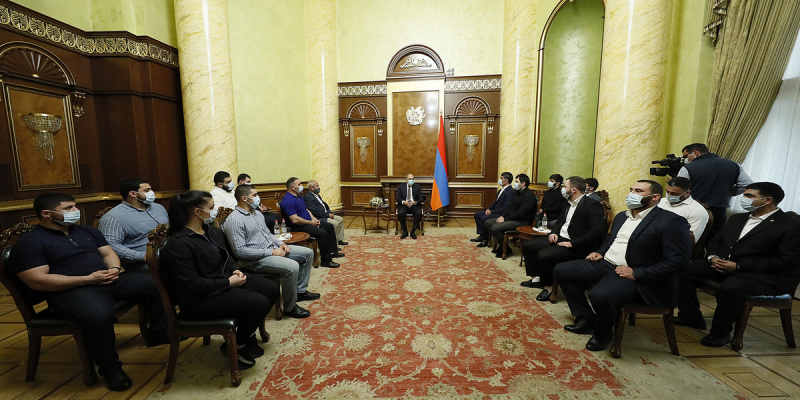 Welcoming the representatives of the sports world, Nikol Pashinyan stated that he invited them not only for congratulation, but also to express his gratitude: “Especially in this period the victories, the feeling of victory that you imparted to all of us, the people of Armenia, are twice as important, twice as worthwhile, because in this post-war period the self-confidence is very important, and I think you have a very significant role with your victories.”

Stressing that both the state and the society highly appreciate the success of the Armenian athletes in the international tournaments, the Acting Prime Minister inquired about the existing issues in order to give them prompt solutions and properly prepare for the Olympic Games. In particular, issues related to the improvement of sports infrastructure, the acquisition of necessary sports equipment, medicine required for maintaining fitness, the quick organization of the procurement process through the single-person procurement procedure, as well as the increase of the amount of allowances for the athletes participating in the Olympic Games, the construction of a sports town and other issues were discussed.

“I know that in many cases, unfortunately, the training conditions are not the best, but I also want to say that we are carrying out very serious work regarding the sports infrastructure. We currently have two ongoing projects. We are founding sports schools named after our outstanding and successful athletes - the Sports School after Arthur Aleksanyan in Gyumri, and the project of the Sports School after Simon Martirosyan is already complete. I hope that we will have a reason to build schools with the names of all of you, you will win Olympic medals and we will solve our strategic tasks,” stated Acting Prime Minister Nikol Pashinyan.

Representatives of the Armenian national weightlifting and freestyle wrestling teams highlighted the importance of such meetings in terms of assessing the achievements, identifying existing problems and jointly discussing effective solutions.

Nikol Pashinyan instructed thօse responsible to develop and submit draft decisions for approval based on the results of the discussion.