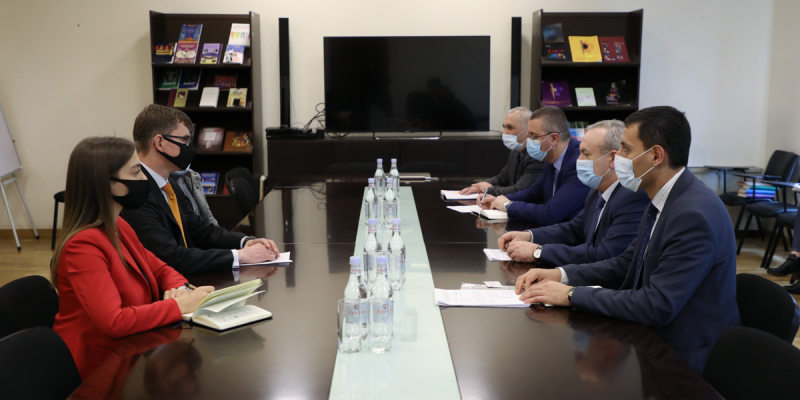 The RA Minister of Education, Science, Culture and Sports Vahram Dumanyan received today Ambassador Extraordinary and Plenipotentiary of the Kingdom of the Netherlands to the Republic of Armenia Nicholas Schermers. The meeting was also attended by ESCS Deputy Minister Arthur Martirosyan.

Welcoming the Ambassador's visit, the Minister underlined the importance of friendly cooperation with the Kingdom of the Netherlands and expressed willingness to take the necessary steps for development and advancement. Vahram Dumanyan presented the main guidelines that underlie the reforms in the coordination areas of the Ministry, and in this context spoke about the possibilities of implementing joint educational, research, and "Erasmus+" programs. The ESCS Minister underlined the importance of implementing joint programs within the framework of inter-university cooperation, which will be aimed at the development of Armenian studies in the Netherlands. In addition, the Minister suggested considering the creation of new platforms and opportunities necessary for intercourse between the youth of the two states.

“There are all the necessary preconditions for further advancement and expansion of bilateral relations. I am sure that this is in the interests of our countries,” said Minister Dumanyan.

Ambassador Nicholas Schermers expressed his gratitude for the reception and presentation of MESCS priorities. The diplomat welcomed the ministry's vision of reforms and assured that he will make every effort to strengthen the Armenian-Dutch relations. According to Nicholas Schermers, Armenia and the Kingdom of the Netherlands have a number of cultural commonalities that can be used as educational and cultural programs.

During the meeting the ESCS Minister drew the Ambassador's attention to the issue of preserving the Armenian cultural heritage in the territories that came under the control of Azerbaijan, and noted that the Armenian side expects the assistance of progressive humanity. Nicholas Schermers replied that the Government of the Kingdom of the Netherlands is well aware of the issue and is seriously concerned.

During the meeting, a number of other issues related to education, science, culture and sports were also discussed. An agreement was made to take practical steps.