ESCS Minister receives the Ambassador of Georgia to Armenia 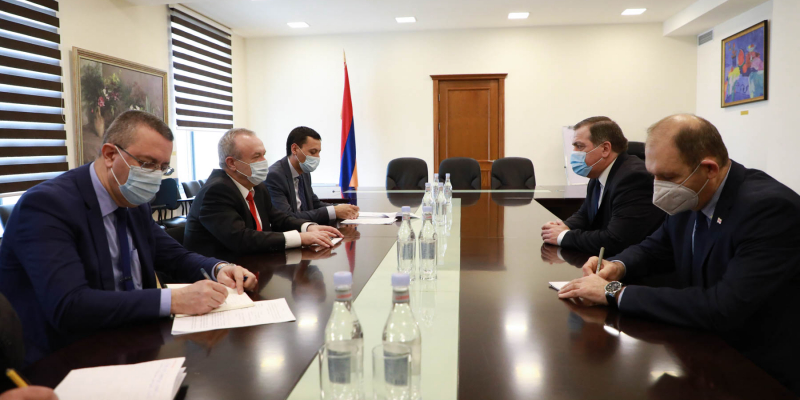 The Ambassador Extraordinary and Plenipotentiary of Georgia to Armenia Giorgi Saganelidze, congratulating the Minister Dumanyan on his appointment, noted that the meeting had been postponed for a while due to the coronavirus pandemic, but he was glad that, in the end, it took place. The diplomat was confident that, despite the fact that the Minister took office at tough times for Armenia, he will be able to overcome the challenges and solve the tasks set for him thanks to his experience.

Expressing gratitude for the meeting, V. Dumanyan noted that the Armenian and Georgian peoples have much in common, and the fraternal and friendly relationships have a history of centuries. As stated the Minister, the past year was very difficult for Armenia. First, the coronavirus pandemic, and then the war, caused irreversible human losses.

“We are also concerned with the fate of the Armenian cultural monuments in the territories under the control of Azerbaijan, which, in addition to being of Armenian origin, are also of great universal value,” noted the Minister adding that Armenia counts for the potential assistance of both the international community and Georgian partners in this issue.

The ambassador was confident that Armenia will overcome the consequences of the war in a short period of time citing the idea of the renowned Georgian poet, publicist Ilia Chavchavadze according to which nothing threatens Georgia from the south if Armenia stands firm.
During the meeting, the parties emphasized the importance of bilateral as well as multilateral cooperation within the framework of international programs. Minister V. Dumanyan noted that it is necessary to stimulate communication between the youth of Armenia and Georgia, thereby ensuring long-term cooperation among the specialists. Sharing the idea of the Minister, Giorgi Saganelidze noted that there is also a great potential for cooperation in the field of education and science.

At the end of the meeting, the parties stated that it is also necessary to strengthen and develop inter-university collaboration and joint student exchange programs.