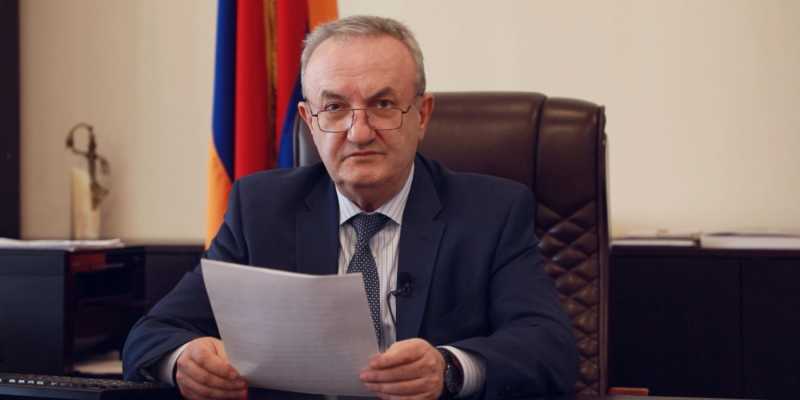 The RA Minister of Education, Science, Culture and Sports Vahram Dumanyan today participated in the round table of the 16th Council of Europe Conference of Ministers Responsible for Sport, in the frame of which the revised version of the European Sports Charter was adopted.

The online event was attended by officials from the member states of the Enlarged Partial Agreement on Sport (EPAS) and representatives of international sports organizations. The round table was chaired by the Minister of Culture and Sports of Greece Lefteris Avgenakis. Afterwards, speeches were made by the heads of the delegations of the EPAS member states.

Head of the Armenian Delegation, RA ESCS Minister Vahram Dumanyan, highly appreciating the commitment and will of EPAS in promoting international cooperation, confirmed the fact that Armenia supports the implementation of the UN 2030 Agenda for Sustainable Development and accepts sports based on fair play, respect and cooperation as an important incentive for development and peace. The Minister also presented the main priorities of Armenia's sports policy and the work carried out: “As responsible for the field of sports, in 2019 we made amendments and additions to the RA Law "On Physical Culture and Sports", paying special attention to the issues of inclusive sports, people with disabilities and special needs, the integration of women, the protection of athletes' rights, and public health. Currently the state strategy for the development of sports is currently being developed, together with the action plan for 2021-2025. We attach importance to multilateral cooperation, thus all the stakeholders, including representatives of civil society, are involved in the development of sports policy reforms. We seriously consider the principles set out in the European Sports Charter as guidelines for developing a sports strategy.”

Minister Vahram Dumanyan also informed that the Ministry has developed and implemented more than a dozen activities aimed at the development of sports, which cover all age groups of the population of Armenia - from preschool children to the elderly and people with disabilities. At the end of his speech, the RA ESCS Minister expressed hope that with joint efforts it will be possible to overcome the challenges caused by the Covid-19 pandemic in Europe.

It should be noted that the round table was preceded by online sessions, during which the issues of revision of the European Sports Charter as a key document for the development of sports policy for the CE member states were discussed. In this context, several issues were considered: the protection of human rights in sports, the protection of the rights of athletes, the adoption of principles of good governance by sports organizations, the strengthening of solidarity between sports movements, etc. Armenia was represented at the discussions by the RA ESCS Deputy Minister Arthur Martirosyan.

It should be added that Armenia has been a member of the Extended Partial Agreement on Sport since 2008, which monitors the implementation of the European Sports Charter and the Code of Sports Ethics in the member states. The Agreement provides for the harmonization of sports policies and criteria in the participating states and between them, as well as provides an opportunity to submit proposals on the necessary policies aimed at solving current issues in international sports․