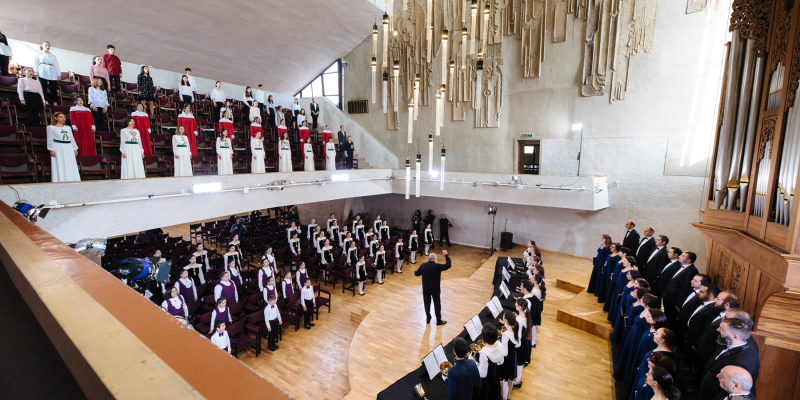 A concert dedicated to the International Day of Choral Art and the heroes of the Artsakh war was held under the auspices of the World Federation for Choral Arts, with the support of the RA Ministry of Education, Science, Culture and Sports, in cooperation with the “Armenian Little Singers” International Association and the Armenian Choral Conductors’ Association. Choirs of Armenia and 7 other countries participated in the concert.

The international Choir Day has been celebrated annually since 1990, on the second Sunday in December.

Hundreds of thousands of choirs from many countries join the festival with performances.

Represented by the International Association for “Armenian Little Singers” headed by Tigran Hekekyan, Armenia has joined the celebrations in different formats every year since 2006.

The event was held within the framework of "Komitas Festival". The event was addressed to the international community with an English message depicting the real picture of the Artsakh war, supplemented with video materials about Armenia, showing the true face of the enemy, their genocidal activities in Artsakh, the real causes of the war, the true picture of the situation in the region after the ceasefire.

“We unite to sing about peace, unity, love, and absolute values for which we have lived for centuries. However, today the heart of an Armenian does not sing," the message reads.

Despite the pandemic, 210 singers from Armenia and different countries participated in the concert.

The Facebook platform of the World Federation for Choral Art was also used to broadcast the concert online.

At the Komitas Chamber Music House, choirs from Tavush and Artsakh performed on stage along with the choirs of the capital. During the concert, choirs from the borderline community Berd, Lithuania, Moldova, Switzerland, the United States, Israel and Germany joined online.

At the end of the concert, all the participating choirs performed the song "Erebuni-Yerevan”.