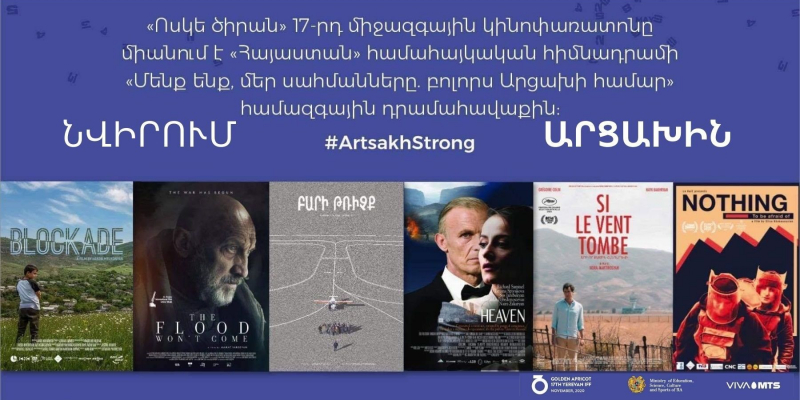 Supported by the RA Ministry of Education, Science, Culture and Sports, the 17th Golden Apricot International Film Festival will join the Hayastan All-Armenian Fund's "We Are, Our Borders: All for Artsakh” nationwide fundraising with “Dedication to Artsakh” project, until November 30 and will contribute to the uninterrupted process of fundraising campaign with consistent implementation of various programs.

On November 1, the "Dedication to Artsakh" project will be launched with the pan-Armenian premiere of the film by French director Nora Martirosyan "Should the Wind Drop", which is included in the Cannes International Film Festival, and will be followed by the premiere of Jivan Avetisyan's film “Gate to Heaven”.

During the first week of November, the premiere screening of the films "Bon Voyage" dedicated to Artsakh by Garegin Papoyan, and "Nothing to be Afraid of” by Silva Khnkanosian, that is included in the programs of the Rotterdam and Leipzig International Film Festivals will be held. The premieres of war films by our compatriot Marat Sargsyan, who lives in Lithuania, “The Flood Won’t Come” included in the Venice International Film Festival, and the "Blockade" by Hakob Melkonyan will also be held.

At the mentioned premieres, all film screenings will be held exclusively on tickets, without invitation cards, and all the proceeds from the screenings will be fully donated to the Hayastan All-Armenian Fund's "We Are, Our Borders: All for Artsakh” national fund. To ensure the continuity of festival fundraising to November 30, the proceeds from "Yerevan Premieres", "Retrospective Screenings" projects, the latest films screened in collaboration with Canada, Switzerland and other countries, within the framework of the Golden Apricot 17th International Film Festival; as well as the exclusive exhibition-sale of posters created by various artists in the days of the war, will also be donated to the Hayastan All-Armenian Fund.

Our rear will be a cultural frontline and we #WILLWIN.

The screenings of the films themed "Dedication to Artsakh" will be held at the Cinema House (address: 18 Vardanants St., Yerevan, entrance from Khanjyan Street). Due to the epidemic situation and the need to observe the safety rules, the number of seats in the hall is limited (150 seats). Tickets will be sold on the days of screenings at the Cinema House.