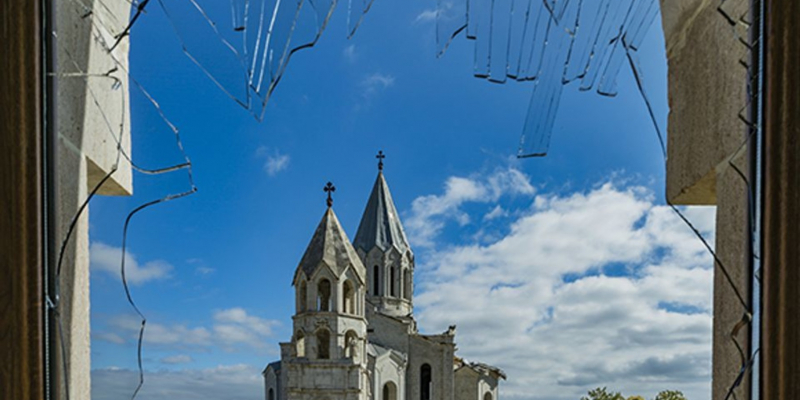 “The Art Newspaper" authoritative periodical published an article entitled “Armenian monuments in line of fire in Nagorno-Karabakh conflict”, addressing the issue of endangering the Armenian historical and cultural heritage and archeological sites due to military actions. The publication writes that the conflict zone is home to numerous monuments of religious and civil importance, memorials and various forms of art, including the remnants of ancient settlements, some of which are now under attack.

Referring to the shelling of the Holy Savior Cathedral in Shushi on October 8, “The Art Newspaper” writes that Azerbaijan has denied targeting historical, cultural, and especially religious monuments. However, according to Simon Maghakyan, an Armenian political scientist now based in Denver, Colorado, Azerbaijan has been deliberately shelling sacred sites to wipe out evidence of an Armenian Christian past and thus any territorial claims. Last year in the online publication "Hyperallergic" Maghakyan detailed Azerbaijan’s destruction of the Armenian heritage in Nakhichevan, including 89 medieval churches, 5840 khachkars (cross-stones) and 22000 tombstones.
“Now it is fair to say that all 4,000 cultural heritage sites of Nagorno-Karabakh are in danger of severe damage, including the historic town of Amaras and its 5th-century Mausoleum of Saint Grigoris; and the 13th-century monastery at Dadivank, which was established as a chapel in the first century.” Said Maghakyan to “The Art Newspaper”.

Referring to the letter of the RA Minister of Education, Science, Culture and Sports Arayik Harutyunyan to UNESCO on 9 October, the renowned publication writes that the same day, UNESCO posted a statement on its website condemning the recent violence expressing its grave concern with the continuing escalation of violence in the Nagorno-Karabakh conflict zone, which is causing rising civilian casualties and inflicting damage on civilian infrastructure, including on schools, cultural and religious sites, and also affecting the safety of journalists. Maghakyan accuses Unesco of turning a blind eye to the destruction, saying it has been “complicit silence toward Azerbaijan’s acts of cultural genocide.”

Maghakyan believes UNESCO has been slow to react for two reasons: Azerbaijan’s financial contributions to the cash-strapped institution (Azerbaijan donated $5m to UNESCO after the US pulled its funding in 2013), and its links to two former directors-generals, Koichiro Matsuura and Irina Bokova.
In 2017, “The Guardian” revealed that Bokova’s husband, Kalin Mitrev, accepted a consulting fee of at least €425,000 ($500,000) linked to a public relations company that funneled an estimated $3bn into various influential groups and individuals to promote the Azerbaijani government on the international stage. Meanwhile, Matsuura served as a trustee on the state-supported Baku International Multiculturalism Centre and was awarded a diplomatic service medal from the country in July this year. Matsuura could not be reached for comment and UNESCO declined to comment on these allegations, referring to its statement condemning the violence.
The popular publication continues: in 2019, the UNESCO World Heritage Committee meeting took place in Baku. At the meeting, UNESCO’s assistant director-general for culture, Ernesto Ottone Ramirez asked both sides to allow UNESCO investigators into Nagorno-Karabakh. The request, however, went unmet.

At the end of the article, "The Art Newspaper" writes: “Following the recent escalation of hostilities, a group of prominent intellectuals and scholars including Noam Chomsky, Gayatri Chakravorty Spivak, Tariq Ali, Viken Berberian, Judith Herman and the philosophers Cornel West and Seyla Benhabib published an open letter in the Los Angeles Review of Books on 16 October calling for a ceasefire “to end the bloodshed and human and cultural carnage” in Nagorno-Karabakh. “We remind you that the site of the bombing includes archaeological sites such as the ancient Armenian city of Tigranakert.” they wrote in the open letter.

The full publication of “The Art Newspaper” is available with this link: https://bit.ly/31PvgbP
Photo by Celestino Arce/NurPhoto.
XMA Header Image
Armenian monuments in line of fire in Nagorno-Karabakh conflict
theartnewspaper.com