Cultural vandalism: The St. All Savior Ghazanchetsots Church of Shushi is bombarded
Culture 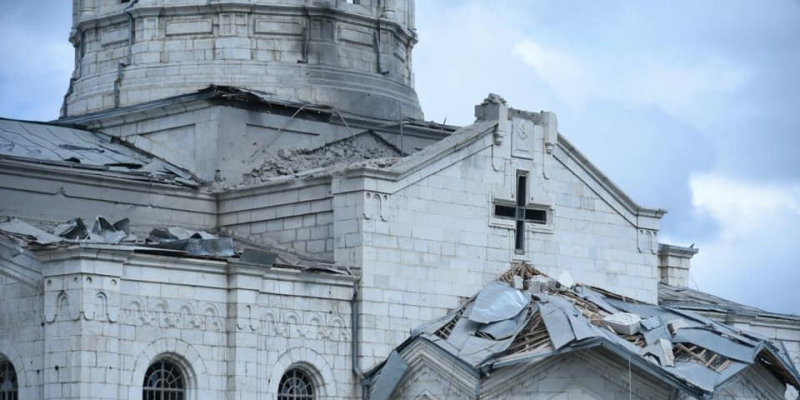 Deliberate destruction of cultural heritage sites is a crime committed during the war. History shows that any manifestation of intolerance towards civilizational values belonging to others, the deliberate infliction or destruction of cultural or religious heritage must be condemned with firm determination. Targeting cultural heritage sites, especially in war situations, is strictly prohibited by a number of international conventions (UNESCO’s 1954 Hague Convention for the Protection of Cultural Property in the Event of Armed Conflict and its two (1954 and 1999) Protocols, the 2003 UNESCO Declaration concerning the Intentional Destruction of Cultural Heritage).

From Syria to Afghanistan, from Mali to Yemen, we have witnessed the destruction of cultural heritage of universal value, which in many cases could not be restored.
Unfortunately, the arguments of the Armenian side - the evidence that the Armenian historical and cultural heritage was systematically destroyed for years in the non-war situation in Azerbaijan, particularly in Nakhichevan - did not evoke a strong response from the international authorities. The number of destroyed monuments was more than 89 medieval churches, 5840 khachkars և 22000 tombstones.

Today, the non-targeted appeals of the international organizations again lead to the targeting of Armenian historical and cultural monuments in Nagorno Karabakh. On October 8, 2020, the Church of the Holy Savior Ghazanchetsots in the city of Shushi was targeted and shelled by the Azerbaijani armed forces. With this step, Azerbaijan brutally violates the norms of the international law, as well as its commitments within the framework of the UN and the Council of Europe.

Compared to the decades-long policy of cultural vandalism and destruction by the Azerbaijani authorities, Armenia and Artsakh have always been committed to promoting peace and solidarity through the preservation of culture and cultural heritage in their territories, regardless of their ethnic or religious origin. The proof of this was the restoration of the "Gyovhar Agha" (Verin Juma) mosque in Shushi, which was significantly damaged during the Artsakh Liberation War and was in a dilapidated condition. In 2019, in cooperation with the Government of Artsakh, the "IdeA" Foundation funded the restoration of the “Gevhar Agha” mosque (Upper Juma) in Shushi. Throughout the existence of the Artsakh Republic, the Holy Savior Ghazanchetsots Church in Shushi was restored and renovated (after the deportation of the Armenians from Shushi in 1988, Azeris smashed the statues of angels of the bell tower, turning the church into an armory; and during the Karabakh war, the warehouse of the Azeri "GRAD" missile system was located here), Gandzasar Monastery Complex (there are traces of bombing on the walls), Vankasar Church in Martakert region, Amaras Monastery Complex (the walls were repeatedly shelled), 4th-century Tsitsernavank Monastery of Kashatagh region, as well as the Dadivank Monastery Complex (used as a barn).

We call on the international community and international authorities to strongly and sternly condemn the ongoing Azerbaijani aggression, during which the Armenian cultural heritage is highly endangered and is under the threat of destruction. By keeping silent, we are paving the way for new cultural atrocities around the world.

The photos of the damaged church are taken by Davit Ghahramanyan, some of the photos are taken from the Internet.