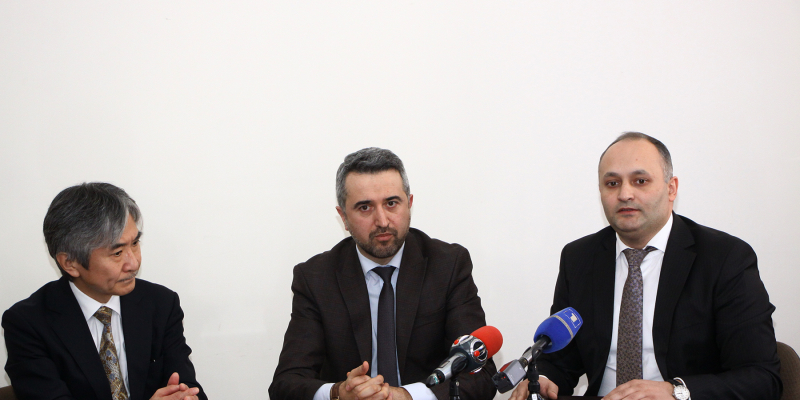 Within the framework of the «Grassroots» cultural grant assistance program of Japan Government, the Embassy of Japan in Armenia and the “National Center for Chamber Music of Armenia” SNCO signed an agreement on providing musical instruments to the State Chamber Orchestra of Armenia. The agreement was signed by the Ambassador Extraordinary and Plenipotentiary of Japan to Armenia June Yamada and Director of the “National Center for Chamber Music” Norayr Nazaryan. The meeting was also attended by the RA Deputy Minister of Education, Science, Culture and Sports Arayik Khzmalyan, who welcomed the ambassador and highly appreciated his support in the development and refinement of Armenian music. “I am sure that with your support, one of our key structures - the National Center for Chamber Music, will significantly improve and refine its professional qualities and capacities,” said the Deputy Minister.”

In his speech, Ambassador Extraordinary and Plenipotentiary of Japan to Armenia, June Yamada, noted that in recent decades he had repeatedly attended concerts of the National Centers for Chamber Music, and the concert hall has becօme very close to him. “Armenia is by far the richest country in the world with its history and culture, in particular, the depth and power of its music are unparalleled. The name of Aram Khachatryan is familiar to every Japanese schoolchild. We even have an organization called "Japan Musical Society named after Komitas”. I am honored to have such a modest contribution to the success and further prosperity of the greatest musical tradition, which is of eternal and cosmic significance.” stated the ambassador.

The director of the National Center for Chamber Music Norayr Nazaryan thanked the ambassador and assured that the acquisition of new instruments will enable to invite musicians of an even higher class and choose a better repertoire.