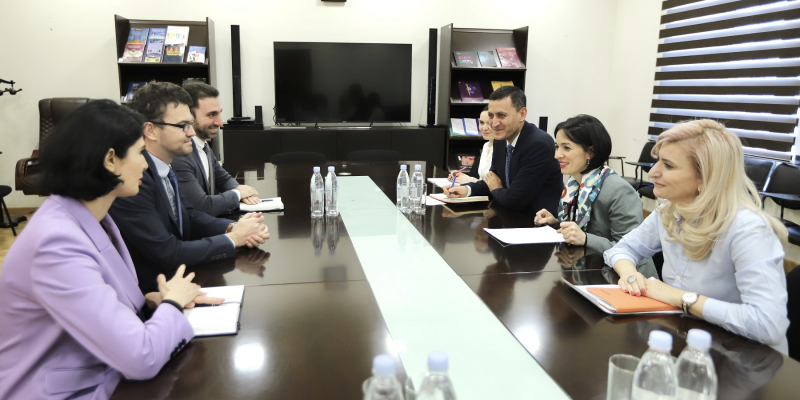 The Ambassador congratulated Zhanna Andreasyan on her appointment to the post of ESCS Minister, highlighting the importance of continuing cooperation in the fields of education, science, culture, youth and sports. John Gallagher wished the Minister joint and fruitful work for the benefit of the development and strengthening of friendly relations between the two countries.

Zhanna Andreasyan, touching upon sectoral cooperation, highlighted the importance of efficient cooperation between the ESCS Ministry and the British Council. The support aimed at ensuring the quality of teaching and training of English teachers, the program of creating English clubs in schools, and the implementation of the "Creative Spark" program at universities were mentioned as successful examples.

During the meeting, importance was attached to the implementation of joint scientific and educational programs that can contribute to the creation of new opportunities for cooperation in the fields of science and education. A reference was made to the course of educational and cultural reforms in RA, and both sides reaffirmed their willingness to cooperate even more closely in the stage of implementation of sectoral strategies.

During the meeting, ESCS Minister Zhanna Andreasyan drew the Ambassador's attention to the problem of the only road connecting Nagorno-Karabakh with the Republic of Armenia and the whole world, blocked by the Republic of Azerbaijan since December 12, 2022, once again emphasizing the irreversible consequences of the humanitarian crisis.

“Every day, the fundamental rights of about 30,000 children are violated, including the right to education. We hope that our concerns will be addressed through diplomatic channels, the problem will be solved and the Lachine corridor will be opened,” noted Zhanna Andreasyan.

Noting that the raised issue is in the focus of attention of the British Government, Ambassador John Gallagher expressed hope that the problem will receive a positive solution.

The Ambassador and the Minister also discussed issues related to the possibility of expanding cooperation. Highly appreciating the work done and the exchange of experience, the parties highlighted the importance of expanding development programs in all directions. During the meeting, a reference was made to the presentation of the progress and achievements of Armenia's educational reforms at the upcoming Education World Forum in London.