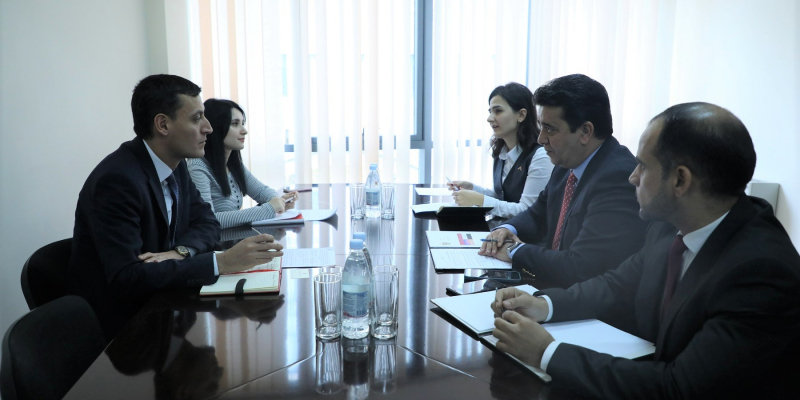 The Deputy Minister welcomed the visit of Suhailan Munther Khaleel Al-Joubouri to MoESCS, underlining that the Armenian side is interested in the prospects of cooperation with friendly Iraq: “Historically, there are good traditions of friendship with the Arab people: we have a favorable environment and untapped potential that we are ready to develop.”

The Charge d'Afaires of the Embassy of the Republic of Iraq in Armenia thanked for the reception and stressed the importance of prospects for cooperation with Armenia in the fields of education, science, culture and sports. According to him, the contribution of the Armenian community to the social and cultural life of Iraq, as well as to the strengthening of friendship between the two peoples is fairly big: “Armenians are very loyal and honest people. You can really rely on them.”

The parties suggested advancing the relations between the recognized universities and research institutions of the two countries through the exchange of experience. Arthur Martirosyan offered not only to implement student exchange programs but also to share the Armenian experience of educational reforms. The Deputy Minister informed the Iraqi side that the National Assembly recently adopted the “RA Education Development State Program Until 2030”, which will become the main strategic guideline for the coming years, directing and coordinating further reforms and programs for the development of the sphere.

““RA Education Development State Program Until 2030” envisages to significantly transform the higher education system to make it internationally competitive. For this objective, programs are scheduled for the internationalization of Armenian HEIs. From this perspective we are sure that we will have a larger number of students from friendly Iraq in RA higher education institutions,” said Arthur Martirosyan.

An agreement was also reached on the development of the legal-contractual base, as a result of which it is expected that higher educational, cultural and sports institutions will receive a good impetus for the activation of bilateral collaboration.

To expand the cooperation between the two peoples and raise the level of awareness, the ESCS Deputy Minister proposed to consider organizing seminars and round tables in Armenia and Iraq, as well as ensuring participation in cultural festivals and exhibitions held in the two countries.

Regarding the cooperation in the field of sports, Arthur Martirosyan proposed to ensure the participation of Iraqi teams in international tournaments to be held in Yerevan, as well as to consider the possibility of holding training camps and training with Armenian athletes in Armenia.

The sides expressed confidence that similar visits will become an additional incentive for strengthening and advancing friendly ties between the two peoples.