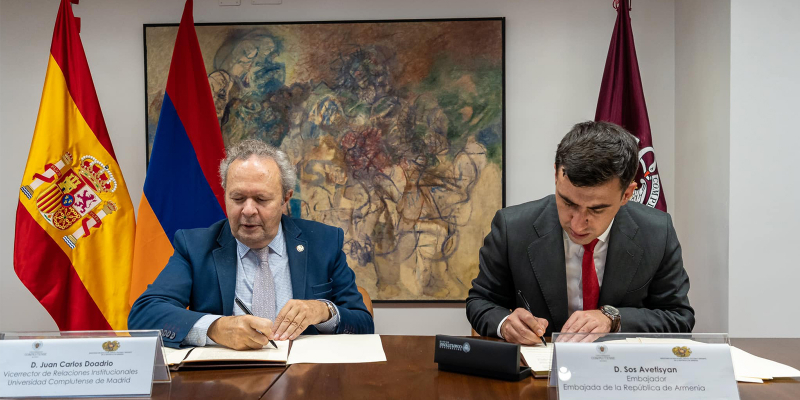 RA ESCS Ministry carries out consistent activities in promoting the teaching of the Armenian language and Armenian studies subjects in universities, museums-institutes and centers of foreign countries.

Accordingly, the RA State budget has allocated funding to more than a dozen Armenian studies centers operating abroad. For the implementation of the program, funding from the State budget is mainly realized based on the memoranda or agreements concluded between these universities and the Embassies of the Republic of Armenia.

According to the memoranda, the first Chair of Armenian Studies in Spain in the structure of the Faculty of Geography and History will be established at the University of Madrid, and an Armenian Studies Center will be founded in Brno with RA State funding. Both structures were established with the objective of raising awareness about Armenia, studying the history and politics of the Armenians, disseminating the Armenian language, and popularizing Armenian culture.

Teaching the Armenian language is planned at Masaryk University in Brno. For the first time, teaching the subject of “Armenian Studies” in Spanish is piloted at the University of Madrid. The program was developed and provided to the University of Madrid by the Department of Political Sciences of the Faculty of International Relations of Yerevan State University (authors: associate professor of Natural Sciences Narek Galstyan and Professor of Natural Sciences Ashot Aleksanyan). The parties are confident that this subject can provide a wider audience and insights into Armenia and Armenian culture.

According to this program, the ESCS Ministry strives to promote the dissemination and strengthening of the Armenian language and Armenian studies in universities of foreign countries. This is a great opportunity to make Armenian culture and identity recognizable, to enhance international interest in the Armenian people and culture, as well as to contribute to the preservation of Armenian values in local Armenian communities.